The Big Five – Who had More Impact?

In a November 2013 article which featured Patrick Ferriday, co-editor with myself of the book Masterly Batting, the BBC asked if Sachin Tendulkar was only the 29th best batsman of all time; this was a reference to Tendulkar’s position on the ICC all-time ratings for Test batsman. The piece went on to compare Tendulkar with four other modern greats – Brian Lara, Ricky Ponting, Jacques Kallis and Kumar Sangakkara.

The ICC ratings are based on match scorecards and are also a measure of a player’s complete career, though more recent performances are apparently given a higher rating. Here are the five players’ peak ratings together with their all-time rankings:-

Tendulkar has dropped to 30th after being surpassed by AB de Villiers since the article was publshed – note that the highest of all time is Don Bradman, with 961. The feature went on to state that “The ratings imply that at his peak Tendulkar was not as impressive as the others.”.

Considering that only traditional scorecard data is used, the career batting figures of the five are relevant:-

Addressing the state of the match

One of the problems with scorecard-based rating is that it cannot take into account the state of a match; a ton scored in an innings of 900-odd as a match peters out to a draw (Aravinda de Silva during Sri Lanka’s record 952/6) is worth about the same as one which represents two-thirds of the team’s scoring (Charles Bannerman in the very first Test match). Similarly, a wicket taken in that same draw merits the same as one which gives the bowler’s side a one-run victory (Courtney Walsh against Australia at Adelaide in 1993).

So clearly a system using only the individual scorecard data cannot differentiate subtleties of win probability. I’ve put together a massive database which includes all partnerships and wickets in Test cricket history, as a result of which it’s possible to ascertain the win probability of each team at any point in a match. By comparing the state of the match at the start of a partnership with that at the end just prior to the fall of wicket, and also the change in win probability after the fall of that wicket, then taking into account which players were involved in those events we can measure the actual impact of every player’s performance on the match state.

Having now derived impact ratings for every player in Test cricket history based on an aggregate of those events, there are many interesting questions which we can pose to this mine of information. One of the questions I have been waiting to investigate is which of the Big Five batsmen of the last 20-odd years has had most impact, being those same five as identified in the BBC feature – Sachin Tendulkar, Brian Lara, Ricky Ponting, Jacques Kallis and Kumar Sangakkara.

The careers of the five of them taken together span more than 1,000 Tests over 27 years from 1989, when Tendulkar made his debut, until earlier this year when Sangakkara announced his retirement. There are a number of ways to compare the five of them using impact ratings, so firstly here are the career summaries for each:-

Tendulkar enjoys the highest total impact, though he has played in the most Tests but Kallis, helped by 292 wickets and 200 catches, has the highest impact per match. In terms of individual match performance, below is each players totals for matches contributing 40%, 30% and 20% in impact on win probability:-

A little explanation is probably due here – 40% match impact doesn’t mean 40% out of a total of 100%. There are many changes in a team’s win probability during the course of a match, both positive and negative, so that 40% represents the player’s contribution to several win probability changes as a match develops. That total may be made up of e.g. 10% in one partnership, 5% from the following one, 15% from the next, less 5% for the batsman’s dismissal, plus 5% for a catch, then 20% from his second batting innings less 10% for his dismissal.

Based on the previous two tables, it would seem that Tendulkar and Kallis are vying for top spot in match impact, with Ponting next and Lara and Sagakkara bringing up the rear. Though Kallis has the most matches with more than 20% of impact, Tendulkar has by far the most high-impact Tests of more than 40% contribution to his team’s win probability.

What we can also do is to compare the career progression of each player based on impact. The plot below shows the moving five-Test average for each player throughout their careers:- 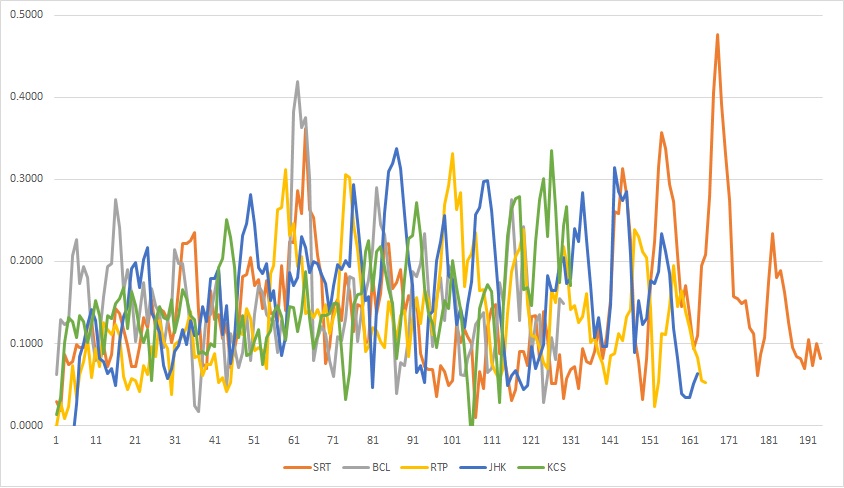 One thing which is apparent is that each player attained a peak over 30%, a mark achieved by only the best players, while Lara and Tendulkar also passed the 40% mark at one point in their careers. For Lara, this was around the time of the 1998-99 series with Australia when he fashioned two of the greatest innings of all time in consecutive Tests. Astonishingly Tendulkar’s peak, while eclipsing the highest impact achieved by the other four, came at a time by which he had played more Tests than the other four would manage in hteir whole careers – his 171st Test saw him fashion an epic 214 and 53* against Australia at Bangalore, taking his 5-Test average at that point to 47.64 – here are the peaks of all five:-

One thing is clear – the statement made by the BBC reporter, based on the ICC ratings, that Tendulkar’s peak is not as great as the others is inaccurate when looking at actual match impact; Tendulkar is significantly ahead of Lara, and the two of them are far ahead of the rest.

Finally we can look at which player was highest rated at each point chronologically – the graph below shows the five-test impact average for each player for the 1043 Tests covering the complete Test careers of all five:-

All of these players at one point or another was top-ranked based on match impact, and for a significant period of time. If we count the number of Tests for which a particular player was rated the highest of the bunch, this shows the following tallies:-

I must admit to being surprised at the above – I assumed that Lara would have shown as having been the most impactful on a percentage basis. The above figures include the periods when there was only Tendulkar/Lara at the beginning and also Kallis/Sangakkara at the end, which means there are three periods where we had four of the five active (187 Tests), all five (313 Tests) and then four again (247 Tests). Here are the leaders ranked by numbers of Tests at the top for the three periods:-

Tendulkar and Lara are way ahead, though they were established Test players (37 and 31 Tests played respectively) by the time Kallis and Ponting made their debuts – during the period shown above Tendulkar played 38 Tests, Lara 35, Ponting 34 and Kallis 37 Tests.

Kallis was massively dominant during this period with more than twice as many Tests at number one as compared to anyone else, while Tendulkar languishes at the back. Tendulkar appeared in 55 Tests, Lara 63, Ponting 71, Kallis 64 Tests and Sangakkara 62 Tests during this period, so Kallis’s dominance over this period was certainly not due to playing in more Tests than the others.

Amazing that Tendulkar was at the top both at the beginning and end of the period when at least four players were active. Three players, Tendulkar, Kallis and Ponting were ever-present during that period, and their total number of Tests at the top is shown below:-

In terms of the longest periods of dominance by one player, for the period when all five were playing these are as follows:-

Tendulkar’s longest period of dominance during this period was only nine Tests. Looking at those periods flanking the above period when all five played, when only four were active, here are the top players:-

It certainly seems that Tendulkar’s lowest run of impact occurred during the period when all five were playing.

How Big is an Elephant?

There are a number of different ways to measure things, and match impact is no different. We can look at career impact as an aggregate, the career impact average per Test, the peak of the five-Test moving average, and the area under the curve created by the profile of moving average and a defined threshold (in this case 20%). It would be better if we had a way to include all of those parameters in our final determination of the most impactful of these players, and in a previous piece I discussed the use of geometric mean to take into account variables of significantly different magnitudes. For the assessment of all players in the previous feature I decided to include the number of Tests played so that players who didn’t play in many Tests wouldn’t skew the results too much; however for this study, which is limited to only five modern players, we can dispense with that. Below are the geometric means for each player based on the paramaters mentioned above:-

While Tendulkar has the advantage of playing more Tests and hence an inflated aggregate impact as compared to the others, he also has the highest area under the curve and the highest peak, which suggests that despite the additional playing time he maintained high quality for the full duration of his Test career – which of course is confirmed by the fact that his peak moving average occurred so late in his career.

No doubt some real statistician will point out the fallacy of using the geometric mean. In which case you can, as I’m sure you will anyway, draw your own conclusions.

Your Time is Gonna Come (Should We Discount the Golden Oldies?)