New regime starts with a win

It’s not often working on Christmas Day is seen as a reward for hard work, but that was the case for several of the Blackcaps squad yesterday, with the squad gathering for their first training under new coach, John Wright.

A non-alcoholic light lunch was the order of the day with new boys Adam Milne, Luke Woodcock and Dean Brownlie getting a quick introduction, before being thrown into an intense fielding session, which was sure to catch out those that had overindulged earlier on the Xmas pudding. With training being on Christmas Day, there were no net bowlers, so within a couple of hours training was done and the guys could head home to enjoy the last few hours of the day with family.

There was a sense of excitement in the group, with a new management structure, some new players and Ross Taylor taking over for the T20 series against Pakistan. John Wright seems like an old school coach, wanting the basic things done well and ensuring there is a passion and pride in representing your country. Such values have resonated with the New Zealand public, who have been calling for his appointment since he finished coaching India back in 2005. Now he has his chance. If the Blackcaps were his Christmas present, then he wouldn’t have to wait long to try out his new toy
.
Boxing Day dawned slightly overcast, but as the day rolled on and the start time for NZ vs Pakistan T20 number one approached, the sun shone down on the new Eden Park, another unknown element in what felt like for those involved, a new beginning for New Zealand cricket. The new South stand and new direction of the pitch meant in many ways it felt like we were playing overseas. No one in the team was sure where the lunch room was, we needed an escort to find the changing room and for once, as a fringe player, I did not have to worry about sitting in one of the old pro’s seats, as it was their first time in the new changing rooms too. Most of the time when you debut or re-enter the team, there is an awkward first few minutes where you wait till everyone sets up their areas before scurrying into an unclaimed spot and begin to unpack.

Warmups ran smoothly, the toss was done and we were in the field. A decision I was happy with as it gave me a chance to get into the game early, although I must admit there was some nervous excitement when the first ball was bowled. It’s been a while since I was involved in an international and the surge of adrenaline as the building crowd began to rise up had me on edge for the first few overs. Then I settled into a rhythm and away I went, just focusing on catching the ball and trying to block out everything else that was going on around me.

Pakistan did well to fight back to score 144 and we knew we’d need to bat well to win but with the small boundaries we knew we had the ability to catch up later if required.

We got off to a flier though with the boys at the top doing well and taking the scoreboard pressure off the middle-lower order. This meant when I came in I could take my time and work the ones where possible. With Ross Taylor at the other end, I knew we could accelerate when needed, so I set about being there at the end and getting the team across the line.

Sure enough it wasn’t long before Rosco smoked a few over wide long on and we were down to 2 to win off three overs.

I was on strike against Saeed Ajmal, Shahid Afridi brought the field up on the offside, so the reverse sweep was on. Some onlookers might have thought it was risky to play a shot like that with so few required but it’s one of the shots I’ve worked hard on, so I went for it. Fortunately for me, it came off, cleared the infield and raced away for four (raced might be a slight exaggeration, but to be honest I was already shaking hands with the captain!)

So the new regime starts with a win, nothing too profound or spectacular, not too elaborate, more workmanlike, disciplined and controlled, something the new coach would identify with, and hopefully a sign of things to come. 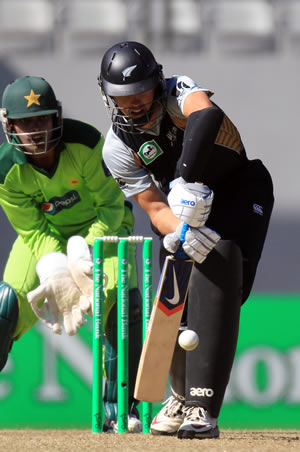 Well done Pete. Congrats on the not out – I thought that was a tough assignment you were given there when you came in with a few runs to win. Good keeping too.

Good read. Good luck to the Kiwis for the rest of the tour and the World Cup after that 🙂

Great stuff Pete – nice turnaround time on the blog too! All the best for the rest of the series, hoping to see you in more games (ODIs!)

Great blog, mate, and congratulations on the win!

p.s. I think you’re a better keeper than Hopkins, and it should have been you in India, not him.

The unpredictability of cricket

The Start of Another Season

Occasionally in life there are moments when things change