Darling of the ‘G

In an era when multi-gifted sportsmen happily excelled summer and winter, Len Darling was among the most celebrated Melburnians of all.

An All-Australian baseballer and Test batsman who had started as a slow bowler at Trinity Grammar, Darling’s popularity climaxed on the first Saturday of the 1937 New Year Ashes when he took three catches, so stunningly breathtaking that the outer crowd rose as one and delivered three cheers.

In the best-attended Melbourne Test match of the century, his one-handed dismissal of England’s hero Walter Hammond on a dodgy wet wicket is still acclaimed as among the finest ‘reflex’ catches seen at the ground alongside South Africa’s Russell Endean (1952-53) and Australia’s David Boon (1994-95)

Darling’s exulted time in cricket spanned almost 70 years from player, coach, mentor, curator and commentator. For years he and wife Bobby (Phyllis) hosted Saturday night Test match parties at their Unley Park home for the touring teams. At their 1948 event, involving Lala Amarnath’s visiting Indians, Darling was struggling to recognize one of the guests. Asking the gentleman his identity, he was told he was the Indian team’s taxi driver who had driven members of the side to his house!

Darling’s eldest daughter Elaine treasures all her Dad’s memorabilia from old newspaper clippings and photographs when he was in his early teens and first playing at South Melbourne through to his Bodyline Baggy Green cap, a stump from his second Test in Sydney Test and an Australian blazer from 1936-37. All are in near pristine condition.

Elaine fondly recalls her Dad’s cricket parties and Keith Miller spilling a drink on the blouse of a pretty girl. ‘Mr Miller,’ she said, ‘that happens too often to be an accident.’

Also vivid among her childhood memories was the autumn Saturday in 1947 when Sturt, coached by her father, toppled Don Bradman’s Kensington in the Adelaide pennant final.

Having made one of the most important centuries of his career, Darling bundled the entire XI into his big white Chevrolet, popping the boot for the stragglers and down the local streets they toured, whooping and hollering, legs dangling everywhere. ‘It was one of the great days of all for Dad,’ said Elaine. ‘For Dad, beating Bradman was better than anything else.’ 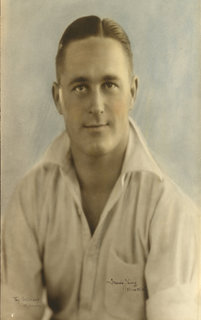 In the final, Bradman made 86 and Darling 117. Under Darling, Sturt was to win three premierships in four consecutive play-offs in the club’s ‘golden era’.

Elaine says her father idolized Bradman the player. But despite having toured together to England in 1934, the Don was never on his Christmas card list.

‘Don would never go down to the bar and have a yarn with the players,’ she said. ‘It was just the way it was for him. He preferred the solicitude of his room but it didn’t endear him to Dad and the others. They were drinkers. Don wasn’t.’

In retirement Darling would pass Bradman at the Adelaide Oval and they would just nod. There was no handshake, hugs or smiles.

When the pair joined Bradman at the opening of the Victor Richardson Gates at the Adelaide Oval in 1967, there was still an unease amongst them all. They smiled, but only for the cameras. Years earlier, Darling well remembered being camped under a rare big hit from Bradman in Sydney and hearing the crowd yelling at him, ‘Miss it, miss it!’ The Don had made a century but the crowd still wanted more. (the catch was taken: Bradman 128, NSW 2-430)

Darling’s dozen Tests were stretched out over five years. His daughter believes had he been less impetuous, he may have played more often at international level, but cricket was very much a leisure then. The players were paid a pittance.

Included for the final two Tests of the 1932-33 Bodyline series, Darling made a Test-best 85 in two and a half hours in Sydney against Larwood, Voce and co.

A member of two Australians touring teams, to England in 1934 and South Africa in 1935-36, Darling playing alongside some of the most illustrious cricketers of any era in Bradman, Bill O’Reilly, Clarrie Grimmett and Stan McCabe.

He was at the other end for McCabe’s famous 189 not out in Johannesburg in 1935 during which the South African captain HF ‘Billy’ Wade appealed against the light, so ferocious was McCabe’s hitting. Years later he told his daughter so fatigued was McCabe in the high altitude that he’d said: ‘Lenny, we’ve got to hit fours.  I just can’t run.’

That visit was the happiest of tours, under the leadership of Vic Richardson, who was to become Darling’s regular Sunday morning tennis partner on his shift to Adelaide.

The job came with a clause: no more first-class cricket, so Darling retired at 27, resuming in Saturdays-only club cricket, playing baseball for South Australia and marrying the love of his life, Bobby who’d he met at a hotel in Adelaide when the Victorians were touring.

Ironically, the biggest Test of his life featuring world record crowds of 60,000 a day over six days, was to be his last. Having made 20 in the first innings, he was out for a duck in the second, having gone in at No.9, the famous day Don Bradman made an MCG-best 270. Within weeks he’d lost his place to another ‘local’ Ross Gregory from Wesley College and with the ’38 Ashes tour still 16 months away, believed his future opportunities limited.

In the early ‘30s, he was named in the Australian baseball team, his daughter believing he was an even superior baseballer than cricketer, but the sport did not have the profile. Darling’s brother Reg was also multi-talented and was coach/manager of the  Australian baseball team which played some demonstration matches at the 1956 Melbourne Olympics.

For 17 years he was the voluntary curator at Emmanuel College, making some of the best wickets outside the Adelaide Oval.

When David Hookes made his whirlwind 34-ball century against Victoria in Adelaide early in the 1980s, Darling was commentating on the ABC.

He loved yarning to his old mates and the day before he died, in June 1992, he spent 45 minutes on the phone to Bill O’Reilly.

‘Won’t it cost a lot (to ring Sydney?),’ said Darling to his daughter Elaine.

Ken’s latest book Heroes of the Hour, cricket’s quintessential moments from Bradman& Lillee to Warne & Steve Smith will be available from mid-October from cricketbooks.com.au