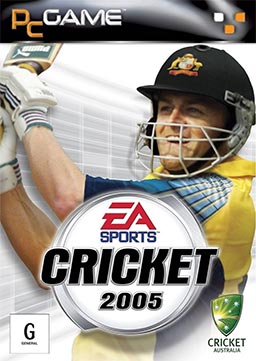 Once again, EA has shown it’s contempt for cricket fans and once again, the equivalent offering from Codemasters (they’re doing Brian Lara’s cricket, right?) will probably overtake this one and show them how a cricket game should be done. I’m sure people remember the shemozzles that were EA Cricket 1999 and 2000. Cricket 2002 was a vast improvement (they bought the original Codemasters model after all) whereas Cricket 2004 was pretty disappointing, even if it did look better.

Cricket 2005 is the best looking cricket game ever, Without a doubt. The movements of the players are great (not on the level of Fifa and the rest but still) and the stadiums look great. This is, of course, only when you’re in the ‘looking down the pitch’ view. Once you hit the ball, however, the graphics deteriorate; all of the fielders look like squat Darren Lehmanns and the fielding models are pretty poor. No matter where they are, they throw without a wind-up landing the ball right in the ‘keepers gloves which gives one very little time to even think about the third run when in reality, there should be one there. Other than that, it’s a great looking game. The bowling is vastly improved from previous games too. That is a VERY welcome improvement. It’s not as easy to bowl batsmen out with sucker balls (i.e. a ball piched in the same spot works every time) but there is some variation in dismissals.

However, even though the claims are made of many shots, very few of them are useful. Even if you hit the drives, unless you loft them, they go virtually nowhere. Leg-glances off the front and back-foot go nowhere even if you get the timing spot-on (the front-foot glance is more of a leg-side plonk to the 30-metre circle), back-foot cover-drives go nowhere and the back-foot shots like the pulls and hooks are almost impossible to time because the ball seems to come off the deck like a tennis-ball, slowing up dramatically once they pitch for the short ones. And who needs a cut-shot? I’ve played several full games and not once have I had a short one outside off-stump which was cuttable. NOT ONCE. Forget about a leg-glance around the corner; the only way that happens is if you mis-time a normal leg-glance. Otherwise it hits the square-leg fielder almost every time.

And those aren’t even the truly annoying things about this game. Here’s the short list;

– Front-foot drives. The batsman ALWAYS plays outside the ball and gets bowled if you play them to balls on off-stump. I’ve tried it in the nets and even if you time the shot perfectly, you will mis it every time. So if you get a ball on the stumps, unless you want to risk trying to time a leg-side shot, you have to defend. Frankly that’s ludicrous. And even then, the drives are pointless because they just dribble past the bowler and with relatively attacking fields, there’s always a fielder there.

– 6-hits. There’s basically two six-hit shots and they are ridiculously easy to time even on the ‘Hard’ setting. The lofted on-drive and the lofted off-drive. In one Gilchrist innings, I hit 9 6’s in the space of a few overs and even though his confidence had then gone to max, still couldn’t time virtually any shot past any of the fielders. The only shot along the ground worth anything is the cover-drive. The rest may as well not be there at all.

– Some fielders are ridiculously accurate. If you hit the ball straight and make the mistake of thinking you’ve got the ball past the straight fielder, think again. I count at least 20 times where I’ve hit the ball, the fielder has dived and then thrown down the stumps. They NEVER miss. Same with any of the in-the-ring fielders; if you’re out of your ground and think about taking a run, you are out. Simple. Stupid.

– THE COMMENTARY. Always the worst feature of EA cricket games, this one didn’t let down the side. Atrocious and annoying after a while. Little variation and stupid comments which don’t match the play like a batsman getting hit on the front pad and Ritchie saying “Oooo, that’ll be sore in the morning!”. At least the shot-neutral commentary is gone, though (“If any youngers out there want to see how to play ‘that shot’, that’s the way to play it”). C’mon EA; commentary not matching the play was solved in the Fifa games in 1999, 6 years ago!

– The opposition play the deliveries you bowl the same way every time, even when their confidence is maxed-out from blocking for 40 overs. So basically, all I had to do to stop the opposition from scoring was the aim for the stumps and they blocked every one. Only when I occasionally got it wrong or got bored and tried a different line or length did they score any runs at all. In a ODI, on HARD! It took me 48 overs to bowl out South Africa for 89, admittedly on a green deck but come on……………..

– Same old bugs. Bowlers still bowl the first ball of a lot of the overs around-the-wicket and then the rest of the over over-the-wicket. Minor gripe, though.

It seems very rushed (no coin-toss sequences or any real video sequences other than between deliveries or at the fall of a wicket). All the little atmospheric differences which make the difference between a game to avoid and a game worth the trouble are missing.

Oh one good tip to help you time more shots is to move your batsman over at the start of each delivery so that their guard is on leg-stump or middle and leg. Makes things SO much better and gives you a more realistic chance of hitting the drives. Watch your off-stump if the bowler bowls around the wicket, though!