I’ve had the dvd of this biopic with me for over a year but its only now that I decided to watch it since I am currently working on the 4th updated edition of my 2008 book, Captain Cool: The MS Dhoni Story (Westland) the last edition of which was released in September 2013.

It was a throwaway line in a recent review of another Dhoni bio—mine was the first, many more have since followed—by Martin that gave me the impetus to bring out an update of this book (thanks Martin!) that has sold over 40,000 copies in English alone (there have been other editions in numerous Indian languages and mobile downloads as well).

My review of the Sachin Tendulkar biopic (Sachin: A Billion Dreams) was published in the August edition of The Cricketer. But in that movie/biopic/documentary it’s only his early years that are depicted by actors. The rest of it is actual stock footage which we have all seen countless times.

I always find it charming to see actors playing real-life sportspersons and can’t wait to the catch the Borg–McEnroe movie just released. The Channel Nine TV docudrama on WSC (Howzat! Kerry Packer’s War) is delightful for that reason alone—where do you find a 6ft 6in blonde guy with a South African accent to play Tony Greig, for crying out loud?!

The casting is excellent here especially a teenaged Yuvraj Singh, complete with chubby cheeks, curly hair and swaggering attitude, played expertly by Herri Tangri—it was eye-popping to see an actor who looked like the young Yuvraj’s doppelganger.

With the clever use of CGI, the SFX people have juxtaposed actor Sushant Singh Rajput’s face (he is outstanding) onto actual footage of Dhoni in action to excellent effect

I must admit to getting emotional watching the small-town struggle of a talented youngster and how he rises to the top through dint of sheer talent and determination despite a system that is not always supportive. Being a small-town boy myself (excluding three years in London) and having paid particular attention to that part of Dhoni’s life, I felt a real connect as if I was part of the story.

I spent a year in the small industrial town of Ranchi where Dhoni was born. It was 1973, I was 14-years-old and my elder brother and I were involved for the first time in organized matches with our club which I named K5—Krazy Kool Katz Kricket Klub (I was the wicket-keeper; bro the captain)–hey, it was the psychedelic 70s and I was already a fan of David Bowie, OK?!

I have vivid memories of that one year and many places where the movie was shot in Ranchi –the cricket grounds, schools, markets, roads, and the office blocks where our Dad worked, all looked uncannily familiar to me and had me awash in nostalgia.

The ‘untold’ part of the movie is the depiction of Dhoni’s first romance with a young lady, Priyanka Jha—this was something that skipped my attention when I was researching and writing and indeed startled his fans and the media.

Priyanka was killed in a car accident in Delhi in 2002 before Dhoni made it to the national team. But with the kind of artistic license usually associated with sporting biopics, she is shown as having died in 2004 after he had made the big time. Apparently the tragedy nearly derailed the MS Dhoni story before it really began and full credit to him for allowing it to be depicted so vividly—the movie after all has been produced by his manager and his agency.

A few delightful vignettes must get a mention here—Mahi’s father played beautifully by famed actor Anupam Kher who is bald in real life—he starts off with hair (a wig of course) and as he ages, reverts to his natural bald look; his school coach Bannerjee’s wife’s haggling in the fish market and her repeated queries of “chai khaabo?” (Bengali for “do you want to drink tea?”) for all occasions, both high and low! And Dhoni’s first meeting with future wife Sakshi when she is a trainee receptionist at a Kolkata hotel and does not recognize him (though going by some reviews, this is also “artistic license” in action).

—Gulu’s biography of Dhoni, Captain Cool: The MS Dhoni Story (Westland–4th updated edition) with a foreword by Farokh Engineer is due for release later this year 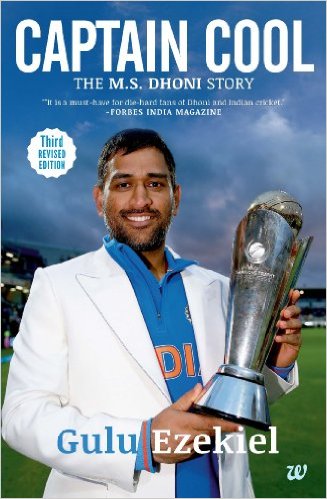