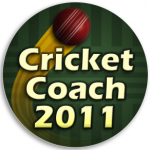 As an avid fan of cricket and sports management sims, it’s perhaps strange that until recently I had never before picked up a copy of any game from the Cricket Coach series. Despite hearing positive things from various sources I was determined to stick with what I knew and continued to play each the version of ICC each year. I’d rather this review did not become a direct comparison between the Cricket Coach and ICC franchises (though to some degree that is going to be inevitable), for in my mind they are two very different beasts, and there is only so much that can be drawn from doing so.

What is immediately impressive about Cricket Coach 2011 is its obvious statistical depth. With over 3000 players and teams from all of the Test and ODI playing nations (and more) around the world, a vast variety is on offer. When coupled with the additional “historic” database scenario and the database editing features, these possibilities become even more expansive. For those who really enjoy analysing statistics and fine details of the events on the cricket field, then there is no finer simulation on the market in this regard.

Another detail which is less important, though very welcome nonetheless is the clean and tidy presentation of the menus. They are crisp, clear and easy to navigate. Given the amount of statistics and information available to browse it would be unfair not to give the layout the credit it deserves. Whilst the graphics and sound are nothing to shout about, it would be foolish to condemn the game on this basis as neither are these things are in anyway integral to the experience it promises to deliver. Both sounds and graphics are neat and tidy and do the job asked of them to a necessary standard. 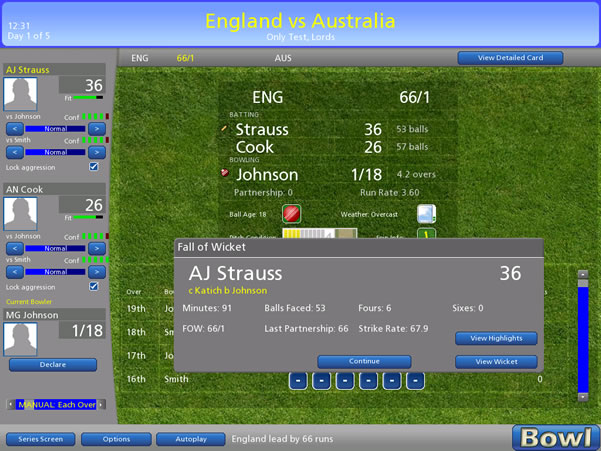 The big issue, however, is the match engine. Throughout my experiences with it I developed a strong love/hate relationship with it. We’ll start with the good points. Firstly, for the most part it delivers an experience which gives the atmosphere of a real match.. The top down view whilst leaving a lot to the imagination serves its purpose well, insofar that if gives you the impression of complete control and oversight, you are given a very clear and precise view of how your bowling plan/field setting/batsman are performing, would the experience be enhanced by virtue of better visuals? For my money, no.

The in match options given are again impressive. The ability to fine tune each of your bowler’s plan of attack down to the nature of each individual delivery further emphasises the attention to detail and customisation at your disposal. However, whilst this may be appealing to some, it may prove to be daunting to a more casual fan.

Similarly, the engine delivers results in a manner and pace that one would expect to find in a real match, with the AI adjusted well for different forms of the game, a concept that in my experience ICC to this day continues to struggle with.

However, there are a couple of deep seated problems with the match engine which are impossible to overlook. Most obviously the top down engine can often be seen to throw up very curious animations such as a batsman crashing the ball away towards the covers only for it to swirl around in the air and end up being caught at mid-off. Similarly, on occasion you see fielders charge in from square leg to take a sharp catch at silly mid-on, covering the ground on the field between these two positions in the space of about half a second. These sorts of incidents are rare enough to ensure that the overall experience of the game isn’t ruined, but they can be frustrating when you end up on the wrong end of them. Worse, however, is the frequency at which the match engine throws up results that defy belief. Freak results stemming from a team’s terrible first innings collapse only for them to be made to follow on, score 600+ and then bowl the other team out for under 150 and suchlike happen just slightly more often than such things ought to. This is a problem further exacerbated by the apparent ease by which one can pick up victories, for all its diverse customisable features, it seems that even with minimal input from the player winning matches is not a difficult feat. For example, whilst playing as England I was able to win the Ashes series in Australia 4-0 (with 2 innings victories), the following one day series 6-1, and then the World Cup (without losing a match), throughout all of which the only adjustments I made were to batsman/bowler temperament. Sadly, this makes the game feel both somewhat unrealistic and that it only gives the illusion of providing the player to make any discernable impact through their own decisions and so on. 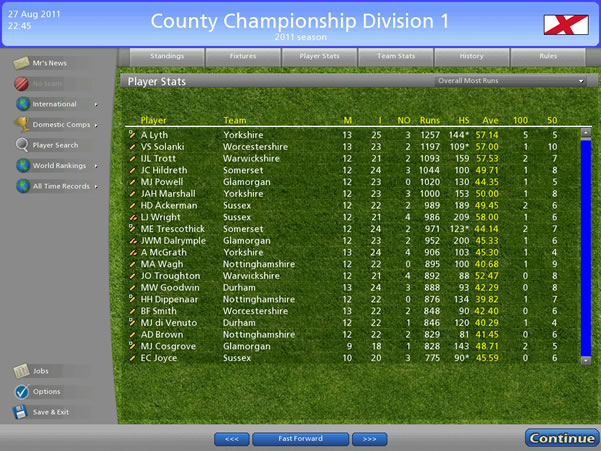 Despite the problems with the match engine, as a cricket fan it is hard not think very favourably of Cricket Coach 2011. The experience offered here is unique in terms of the amount of depth and scope laid at the player’s finger tips. Whilst the heavy stat based and detail intensive style is perhaps best suited to the more hardcore fan, there is enough enjoyment here to satisfy the more casual player. As previously mentioned, the potential for customisation and sheer scope of the in game options and environments mean that this is a cricket title with unrivalled longevity and replay value, and for this it must be given the recognition it is duly deserved. The match engine issues, however, cannot be overlooked, and it must be said they are what is stopping this title from being something truly special, but if these issues can be addressed in future versions, it’s hard to see how Cricket Coach could be improved much further.