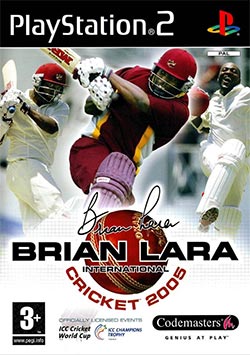 Cricket has never been an over-represented category on games developers’ to-do lists – but as cricket has returned to summer 2005’s sphere of cool, Empire, Codemasters and EA compete for a portion of the world’s disposable income as they look to revitalise the genre – or polish a rusty old machine and pass it off as new.

Cricket 2005 has disappointed, seemingly little more than a tarted-up re-working of the 2004 version – complete with a reduction in the number of shots playable and the removal of the mid-game-save function if you’re an Xbox owner, and the sudden announcement of a fresh incarnation of the International Cricket Captain with a month’s notice fills me with little expectation of much beyond a glorified data update – but I still hope.

Brian Lara International Cricket (or Ricky Ponting I.C. if you’re an antipodean) is more than window dressing. Cricket gaming has been about batting since time immemorial, for bowling – without flexibility, without disguise and without any ability to move the ball at any pace above Paul Collingwood’s – proved little beyond a search for the position where the ball should be bowled in order to get the computer out every time. That, or playing your mates and pointing ridicule as they play your slower balls several weeks before they shudder into middle stump.

Brian Lara seems, at long last, to have changed all of this. Now, there is scope. Scope to swing and seam the ball at all paces, scope to move the ball in and out late on and scope to bowl where you want, how you want and where you want. Pack the slip cordon on a favourable track, bowl back of a length, seam the ball away, add a bit of late swing and you’re in business… unless you slide onto middle and leg stump, in which case you’re punished through midwicket or behind square. Want to recreate the riveting middle overs of an ODI with the spinners on and the field back? Five an over is yours. Feeling confident, and want to spear one in at the batsman’s feet? Hit the special delivery button, and you have one toecrusher to order. It’s cricket the way it’s really played.

You can’t blame the computer when you spill catches, or throw the ball seventh bounce in from the boundary like an 83-year-old pensioner any longer, either. The timing meters that govern each instance require precision and concentration – and suddenly there’s much more tension in your front room when the number eleven sends it skywards with three needed to win. So that’s two out of two… what about willow wielding?

Firstly, much has been made of the lack of EA’s front- and back-foot options in Codemasters’ offering, simply opting for four stroke buttons in leave, block/defend, attack and slog. Now people have claimed that this is a major omission – but why? It doesn’t take a genius to decide to crash the half volley outside off stump through the covers off the front foot – and it’s not rocket science to deduce that the leg stump long hop goes to the midwicket fence off the back foot. There’s perhaps one delivery in twenty that catches you in two minds – and personally, I’m amenable to the tradeoff that misses the close-quarters decision making but avoids the inevitable expletive-laden exclamation confounding the fact that you were bowled hooking a leg stump half volley.

Batting, in reality, is instinctive. You pick the ball, you pick the shot, you play the shot, then you accept the applause/cower before the contempt (delete as applicable) of the watching galleries. B.L.I.C. is much the same – there is no need to convert your instinctive impulses into button selection. It flows from brain, to hand, to bat and then, if your timing’s spot on, to boundary. Lara ’05, unlike many of its predecessors and competitors, ifs heavily timing dependent – making it easy to pick up (even for your non-cricketing housemates) but tricky to master; and – remarkably – a game where form takes its effect. Put it down for a handful of days, pick it up again and find yourself six down as your smears go vertical rather than horizontal – or be rewarded as you settle yourself in and build an innings.

Yes, perhaps it’s a touch too simple to pick up a medium pacer with a flick off your pads over the square leg ropes, maybe the AI’s intensity chasing down a target leaves a little to be desired – and it’s possibly a little too eager to tone down the bowling speeds if you’re not bang on the no-ball line, but which computer program has ever been perfect? (Keeping Project Magpie comments to a minimum would be appreciated here…)

The bottom line – I’ve bought a PlayStation 2 solely so I can play this game (my graphics card has 3D issues). There’s got to be something in that.