Yeah, that one is definitely up there.

In no particular order

The Tied Game - that's where the WC came alive for me

KOB and Ireland vs. England

South Africa's quarter final choke, failing to win a KO game in a WC yet again. Moment in question should be Oram's catch off Kallis, that started the slide.

In order of occurance.

Plenty of other awesome moments tho, such as England in general until the KO (losing to BD, beating RSA, above mentioned moments), Robin Peterson coming off with the new ball, Malinga's six yorkers, Wahab Riaz's ball to Yuvi, Steyn's five-fer, Malinga dismissing Sachin in the final, Jayawaradene's shot to bring up his 100, which kinda launced the final surge for SL to get to what seemed at the time an imposing total. Dilshan being a revelation with the ball, UV's rebirth and general awesomness, Munaf's caught and bowled, plenty of other fine catches and fielding efforts. Zak's second/third spells. Ajmal vs. Tendulkar. Afridi's celebration pose. Balaji Rao. RTD's 100 vs. England. Harbhajan dismissing Umar Akmal, the moment that you felt India had this game won. MSD's Six over backwards point which brought the equation down to 37 off 41.
Last edited: Apr 3, 2011

Zaheer's slower "knuckle balls" to dismiss Dwayne Smith at a crucial moment and Hussey in the QFs worth a mention, IMO. Brilliant pieces of skill.

That Wahab Riaz in-swinging full toss to Yuvraj has to be the ball of the tournament. Very full, very fast, and superb late in-swing..........reminded you of Wasim and Waqar at their best

Hard to narrow it down to 5, all of these were great moments. A couple that haven't been mentioned would be England's turnaround against South Africa and Hiral Patel's six off Tait. 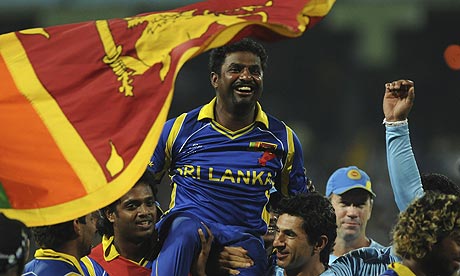 Shri said:
Who is he?

I agree with most of the ones mentioned above. Also, from a purely biased NZ fan's perspective, I'd put in Jesse Ryder's catch and pose in the semi. It was a wonderful moment.

Swann's wicket of Sarwan was amazing. A short leg catch in a ODI = win

ESPNCricinfo's top 10 performances (Incidentally, the guy who wrote this article is a senior from my university):

World Cup 2011: Ten performances that lit up the World Cup