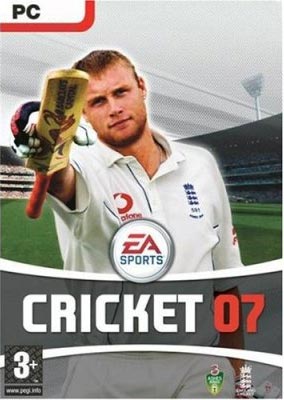 EA Sports have released their latest cricket simulation which hit the markets around the world in November, amid stiff competition from Codemasters who announced their latest title, Brian Lara International Cricket 2007 for release in March 2007.

Despite leading the pack in the graphics field, many EA Sports cricket titles have been criticized for flaws in gameplay, and as a result many gamers have defected from the genre altogether. Does Cricket 2007 produce the goods, and will it restore confidence in the market?

Those used to EA sports titles will find the menus easily navigable. The usual “Play Now”, “Create a Player” and “Practice Nets” are available, along with numerous ODI tournaments and of course the coveted Ashes mode which throws you into a gruelling full length Ashes tour. Profiles, Rosters, Tournaments and Matches are loaded and saved in the “My Cricket” section, and a decent but fairly unknown bunch of bands produce the soundtrack to the game. Perhaps the most glaring omission that will be included in BLIC 2007 is the lack of online gaming.

Those expecting a huge change in style from Cricket 2005 will be largely disappointed. The main innovations being a change in camera angle and the ability to make the batsman and wicket keeper transparent when you call the action from behind the wicket. Graphics however continue to look sharp, the stadia are lifelike, and best of all, you don?t need a killer system to run the game well.

Mark Nicholas does an adequate job of calling the game, Nicholas being far superior to Cricket 2005’s Jim Maxwell, and the crowd noises are many and varied as one would expect.

EA have concentrated on tweaking the gameplay to produce a more accurate reflection of a cricket match. The first noticeable aspect is the five difficulty stars as opposed to three in previous releases. Players however will be frustrated at the lack of edges and ease of runscoring on 4 and 5 stars. I found 3 to produce the best balance between ball and bat.

Bowling is now a very rewarding experience and something that EA have improved beyond all recognition. AI batsmen seem to be a tougher opponent, but the varying modes of dismissal are impressive. Batsmen can now all be bowled, caught and bowled, caught behind and at slip, caught off the top edge, dragging the ball onto their stumps, caught off the leading edge, and run out. Although the player faces a stronger opponent, there is never a time when you feel you cannot make a breakthrough.

The bare bones of controlling the bowler are unchanged, and the confidence meter yields the same bunch of special deliveries that were available in previous titles. The AI will now crunch cover drives to the boundary as opposed to patting them to cover fielders.

A manual field option is also available, although this just controls the end at which a fielder will throw to, as well as the strength of his throw. Fields can be changed at the push of a button, as can whether a bowler comes from over or around the wicket.

Spin bowlers remain dominant, with a large proportion of their wickets coming via bat pad catches. Their potency can be decreased in the player editor however, and once settled, a batsman will lay into even the Harbhajan?s and Muralitharan?s of this world.

Batting remains a big disappointment however. In ODI’s the frustrating inability to pierce the ring of invincible fielders will annoy players during the first fifteen overs, and even on 5 star difficulty, sixes are worryingly easy to hit.

The much hyped “Century Stick” does a great job of changing the strength of strokeplay, but in the end, the ball always travels in roughly the same direction. Look out for patches available that will rectify this problem

Bugs are for once, not a major problem in this production. The lack of edges in 5 star difficulty will annoy, but 3 stars still produces a challenge and realism to boot. The stats for the off strike batsman are displayed when a milestone is reached, but neither of these affect the cricket experience in any big way.

If you are looking for a game to bring out the firing Allan Donald in you, EA delivers a great challenge for bowlers, presented in a slick and innovative title, however batting remains a frustrating and unrealistic undertaking. I would recommend this title as it shows an improvement on any previous cricketing game, but only to the bowlers amongst us.