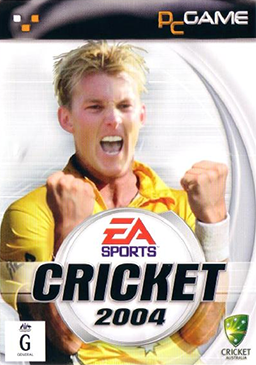 My first impressions of the game play were, it was not as much fun as 2002, but wait, giving it 8 or more hours of practice and play I must say this is far, far more realistic and challenging than 2002. This is much more a sim than 2002 and will appeal more to the real cricket fans than the arcade slogging kids. And yes its still fun, just learn it.

Batting, you can’t just start slogging from the outset, there is a batsmen’s confidence meter that has to build up with well timed shots before you can hit the big ones. Careful shot selection is the key. Be patient and the big hits will come, but now they will seem more satisfying as you have worked the batsman up to it. Lose his wicket and you feel genuine disappointment as you now have to build the new batsmen up all over again. You will have to get used to the new keyboard layout; it’s sort of opposite to 2002, with the arrows now used to control direction and w and s, front and back foot shots. It seems awkward at first but is actually is a much more sensible layout and makes controlling the menu system much better.

Batting for me is still the most fun part in the game. As Australia in a 10 over match Vs India I average 80 runs and have one time only kept them below there target. So I need more bowling practice.

Bowling to me is even more improved than batting, on the PC version anyway. I actually hated bowling in 2002 and always auto played around it. With 2002 the bowling marker seemed to skate all over the place, making it very difficult to place the ball correctly. Now in 2004 it still moves around a little but generally is much more controllable. No balls are less frequent too, as the meters are much more visible. The pace bowlers don’t seem to swing the ball much though; a bit more visible swing would have been good. With the spin bowlers the fun facter increases 10 fold. The ball really turns heaps; just slow down your bowling speed and watch the ball bite into the pitch a rip around the legs. Great stuff.

Running between wickets now is much better timed; previously batsmen ran and turned too slowly, now it is much more realistic. It’s easier to judge runs and the fielders don’t hit the stumps as easily. It takes time for the keeper/bowler to gather in the ball and break the wicket.

Graphics have improved significantly, I run the game at 1280 by 1024 with max details and it looks great. The motion is super smooth compared to 2002 on the same machine. The animations in batting are spot on, playing a power leg glace for six looks awesome. Just the general smoothness is perhaps the biggest improvement but also the details are much better to.

Players look. The player’s shapes have been reasonably implemented, there are heaps of various body shapes and sizes and generally they look a lot more human than in 2002. They are more detailed, there motions and animations are more seamless, much better. What is a little disappointing at this stage is that it’s hard to recognize any player face from each other. There are hardly any real faces on the players. The only player I could pick was Sachin Tendulkar. But there is editing tools were you can add faces, so I hope some enthusiasts will do some mods for the main teams. The faces that can be applied are actually quite detailed

Replays are excellent, you can now move the camera to any location you want as well as the pre defined positions. Great to go directly above the pitch to watch the swing\ spin of the ball. Or a side on view of the batsman square cutting a fast ball is great to watch. Keyboard controls are much better laid out. Slow mo replays look better than ever. Can’t save them though.

Stadiums, its great to have many more stadiums available but to be honest I don’t think it’s a huge deal. A lot of work seems to have been done modeling them all. Now 60 plus. I suppose if you live near one of the newly added stadiums it will appeal.

Players abilitys can be fully edited and new players added. There is literally hundreds of players and heaps of domestic teams from around the world.

Game plays, various types available. Tests, knockouts, etc. I haven’t really explored them. I’ve just been playing 10 or 20 over exhibition matches, usually Australia Vs India, as they are touring here at the moment.

So to sum up Cricket 2004.
Hats off to HB studios for making the best cricket game ever. Many improvements on 2002. Defiantly worthy of purchase. Has a sim like quality to it. Has endless replay value for a cricket fan. Looks great and a PC version that doesn’t seem like a console version afterthought. Great Stuff.