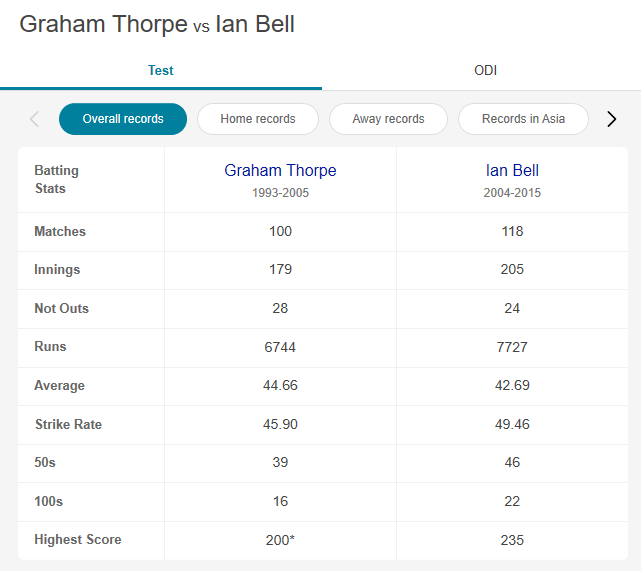 Who have you always preferred?

Always had a soft spot for lefties.

During Thorpe's career, I always thought he was the best English batsman. Played in a really tough era too. I would go with him here. Bell was very good as well.

Bugger, should have added a poll to the OP.

We can do manual tallying then.

I'll go Thorpe. Better away average and a better average overall. I note that Bell averaged more at 5 and 6 than usual. Given the lack of quality he batted with that isn't a lot of second new ball facing so I'm inclined to downgrade him for that too.

This is like comparing David Boon with Usman Khawaja. Thorpe leaves Bell for dead AFAIC.

jimmy101 said:
Bugger, should have added a poll to the OP.
Click to expand...

You can still manually add one IIRC, just look at thread options. Alternatively, convince a mod to help you do so.

morgieb said:
This is like comparing David Boon with Usman Khawaja. Thorpe leaves Bell for dead AFAIC.
Click to expand...

Yeah there's no real way Boon can beat Khawaja is there.

morgieb said:
You can still manually add one IIRC, just look at thread options. Alternatively, convince a mod to help you do so.
Click to expand...

Had a squiz at the advanced options a little while ago but failed to figure it out haha. By the sounds of it, Thorpey's got this one covered anyway :-)


Did read the title as Graham Bell though..

i was about to argue that Bell played in more wins, but there's no real difference there either. It's got to be Thorpe

Yeah Thorpe had fight. England's best batsmen for a little while.

A bell 100 was good too watch and whilst he gets criticised he did come right for an extended period. He ended up having a decent career.
T

For some reason I thought Thorpe had a 35-39 average like most English batsmen of his time. Didn't realise his average that was good - that's really fantastic for the 90s. He was always a pleasing batsman to watch.

Thorpey was a ray of light from heaven illuminating the stygian gloom of 90s English batting.

A fair few of the successes of Nasser's reign were in no small part due to his doughty efforts. The Series wins in Pakistan and Sri Lanka spring to mind.

I've probably moaned more than once before on his behalf about the decision to dispense with his services before the 05 Ashes, ironically for the young Ding Dong (and Pietersen too, kinda; it was a 3 players into 2 slots dealy). We'd likely have won somewhat more comfortably if the great man had still be in situ rather than the callow Bell.

Bell was always an attractive batsman to watch but, and here I steal a turn of phrase that Son of Coco used & I've always thought it apt, struck one as a batting apologist. Whereas Thorpe's countenance (the gimlet eyes, the chin perpetually sporting a shadow of beard growth, long before it was de rigueur) screamed permanence, Bell's demeanour seemed to suggest "I'm just here to score a few runs, if that's not too much trouble, and then I'll nick off, that's if no-one minds, terribly. Sorry!"