Spikey said:
+ an atlantic article about ohio which might explain the above: Meet the Ohio Voters Who Are Killing Romney's Campaign - Molly Ball - The Atlantic
Click to expand...

boy romney just walked into this

otherwise he's probably in front. obama talking too much. and needs to throw in some anecdotes. seems a bit more aggressive

A very different Obama to the bloke of a fortnight ago.

NO ITS NOT SETTLED!!

'Of course they add up. I balanced budgets...businesses, Olympics'

Lol, Romney claiming he’ll bring in the Keystone pipeline from Canada on day 1 and gain energy independence for North America.

It’s a pity our government failed to have the foresight, two decades ago, to get Canada equipped with the essential processing and refining infrastructure to establish our own value-added production, gain Canada alone the independence in the refining industry, and ship overseas. To hell with increasing corporate bottom line. All this does is make American businesses happy.

Haha, the American view on immigration is soooooooooo different to ours.

Wow, Romney fact-checked by the moderator.

How could he conspire to stuff up the Libya question of all things? Extraordinary.

How could he conspire to stuff up the Libya question of all things? Extraordinary.
Click to expand...

Not entirely happy about the 47% comment at the end. Seems sneaky. I would've actually loved to see Romney try and defend that. Also, the big bird references need to stop already.

Haha, the American view on immigration is soooooooooo different to ours.
Click to expand...

America embraces its immigrant heritage as who it is. Australia sort of days "We're an immigrant nation too, but we aren't happy about it, and no more please!"

Meanwhile, in keeping with the last debate post-script, here are the candidates if they swapped hair with their respective wives. 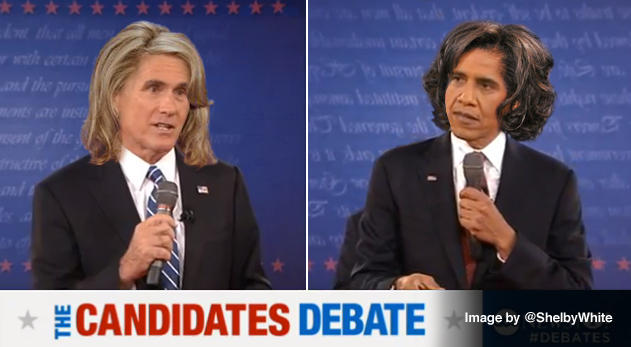 So we've all had a laugh at the "binders full of women" thing. But it turns out that Mitt Romney wasn't telling the truth about that, either.

Mitt Romney: An important topic, and one which I learned a great deal about, particularly as I was serving as governor of my state, because I had the chance to pull together a cabinet and all the applicants seemed to be men.

And so we took a concerted effort to go out and find women who had backgrounds that could be qualified to become members of our cabinet.

I went to a number of women's groups and said, "Can you help us find folks," and they brought us whole binders full of women.

Here's what actually happened, according to the Boston Phoenix's David Bernstein:

What actually happened was that in 2002 – prior to the election, not even knowing yet whether it would be a Republican or Democratic administration – a bipartisan group of women in Massachusetts formed MassGAP to address the problem of few women in senior leadership positions in state government. There were more than 40 organizations involved with the Massachusetts Women's Political Caucus (also bipartisan) as the lead sponsor.

They did the research and put together the binder full of women qualified for all the different cabinet positions, agency heads, and authorities and commissions. They presented this binder to Governor Romney when he was elected.

I have written about this before, in various contexts; tonight I've checked with several people directly involved in the MassGAP effort who confirm that this history as I've just presented it is correct – and that Romney's claim tonight, that he asked for such a study, is false.
Click to expand...