For real? Which one of his name?

Chewie said:
The AI just tends to bowl whoever has a higher bowling rating
Click to expand...

And it worked to my advantage lol.
It's depressing to see...you(the AI) picked the guy and just didn't bowl him. Somehow he made up with the bat.

Pierre made a FC century sometime in 2018-19...possibly this year. Have to check.

SillyCowCorner1 said:
For real? Which one of his name?

Isn't maul the opposite of preserve

trundler said:
Isn't maul the opposite of preserve
Click to expand...

could be another language than English, i've heard they exist

I thought that it was his first name.


I am familiar with Veer, because of the movie Dharamveer

trundler said:
Isn't maul the opposite of preserve
Click to expand...

in English, yes. Not in the language of origin of the name.​

in English, yes. Not in the language of origin of the name.​

Is the origin of the name Hindi, Sanskrit, or any of the other languages spoken in India?

Yeah.. not sure of exact origin but it is a tamil word now.

SillyCowCorner1 said:
Is the origin of the name Hindi, Sanskrit, or any of the other languages spoken in India?
Click to expand...

This is interesting, the area where Permaul grew up in has a lot of people who we call madrasi, assuming that they had fore-parents who were brought from modern-day Chennai 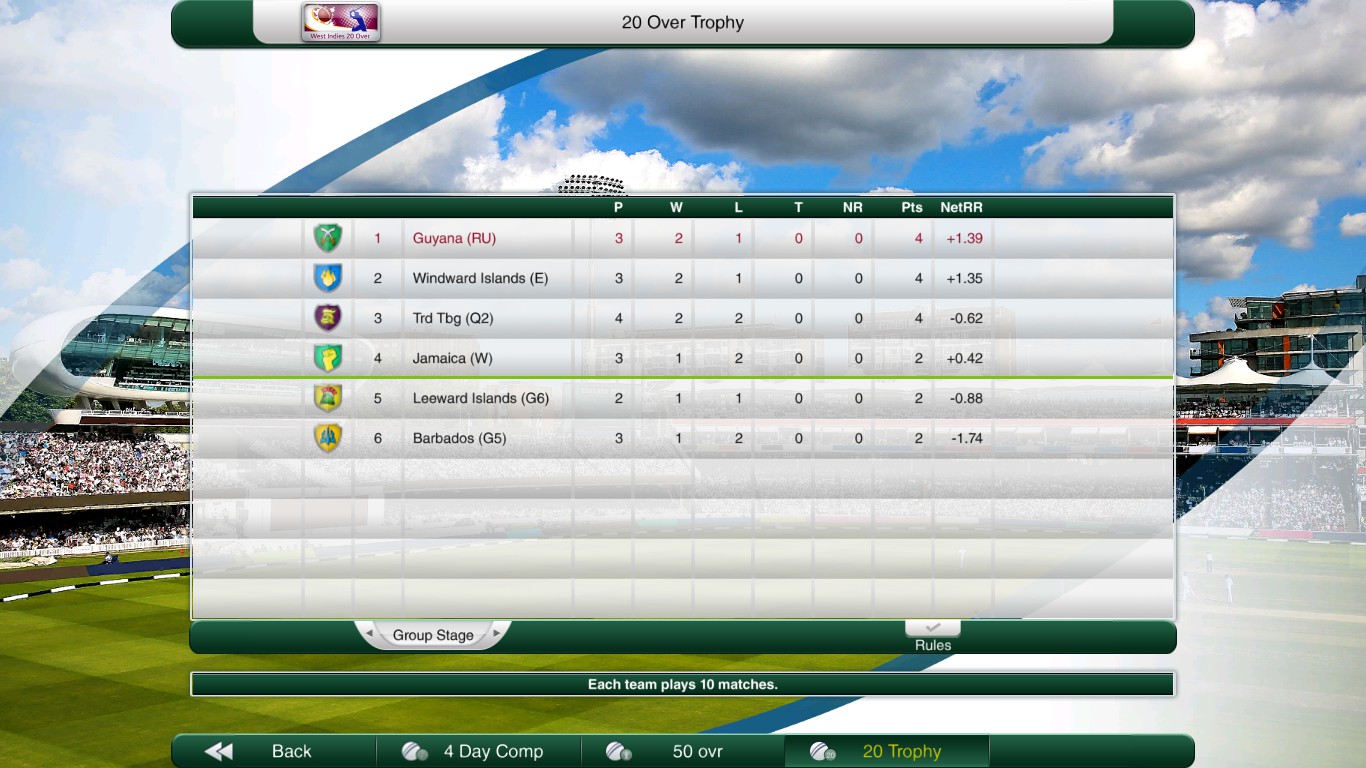 SillyCowCorner1 said:
This is interesting, the area where Permaul grew up in has a lot of people who we call madrasi, assuming that they had fore-parents who were brought from modern-day Chennai
Click to expand...

Chennai is a very small part of Tamilnadu though, I would venture most people who emigrated would have been from other places in the state.

Training and physio sessions remain the same. Next match up is on August 13th, 2017, against Windwards Islands in St. Lucia. Windwards are currently in second place in the standings.

Katwaroo replaces Gajanand and takes the gloves from Walton; Hetmyer moves up the order to #3.
Last edited: Jun 10, 2020


Guptill and Bowlers Choke Windwards​
Another clinical performance from Guyana with their 3rd win in a row. Guptill continues with his fine form with the bat. Defending a modest score of 146, the Guyanese bowlers once again apply their vice in this tournament.

After winning the toss, Guptill chose to bat first on a pitch that was good for batting but the outfield looked like the grass wasn't cut for a fortnight. It was very slow.
Walton had his first failure with the bat as he made only 1 run, he was trapped LBW by Darren Sammy (who I assumed was the captain of the Windwards...rather odd). Hetmyer, promoted up the order, was in fine nick. He struck 7 boundaries and a maximum for a delightful 43 off 34 balls as Eddie Leie cleaned bowl him to send him back to the dressing room. He added 58 runs with his captain for the second wicket.
Babar Azam came in at #4 and batted with Guptill until the end of the innings. They had to do a lot of running because of the slow outfield. In the last 2 overs, there was the acceleration as 23 came off those overs.
Sammy was the pick of the bowlers for the Windwards taking a solitary wicket for 21 runs off his 4 overs, and Leie with the other wicket conceding 30 runs off his 4 overs. 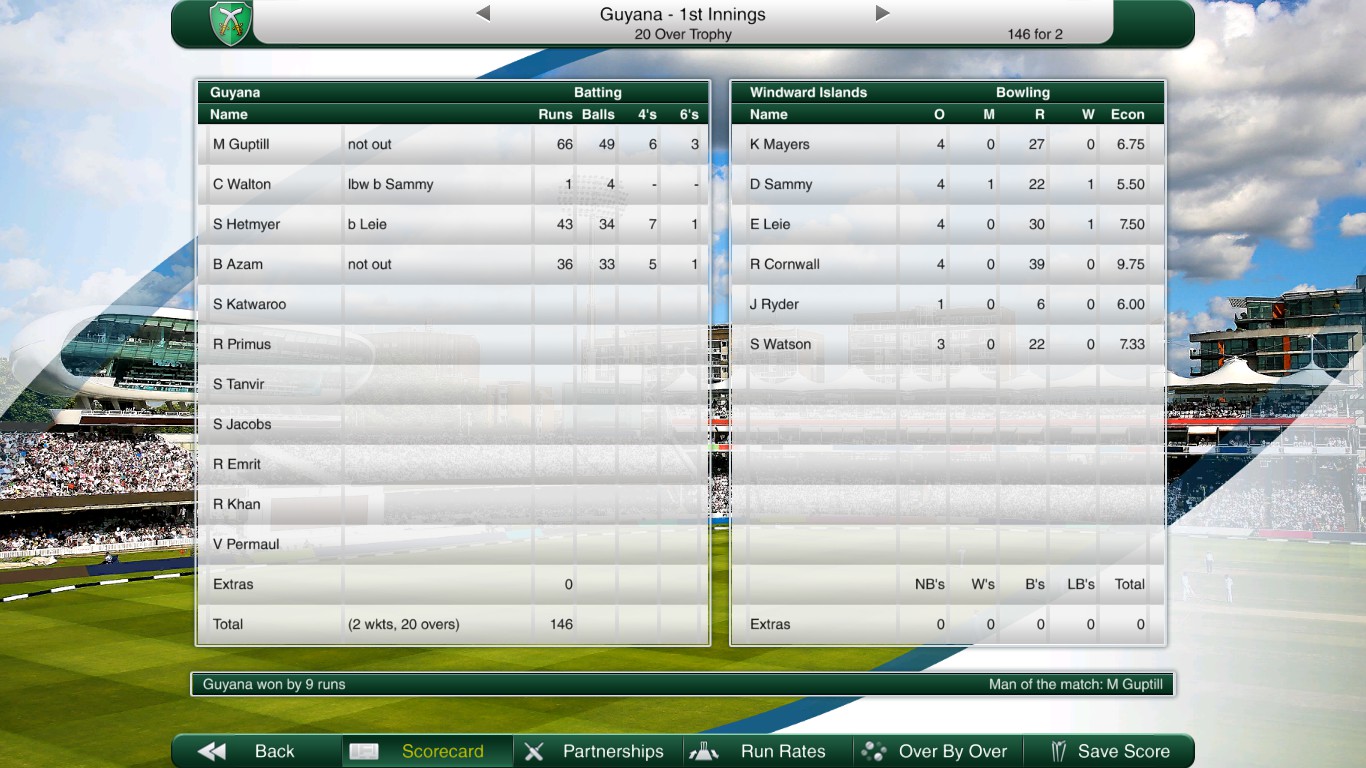 The opening pair of Shane Watson and Jesse Ryder added a rapid 32 in 4 overs for the 1st wicket, then the latter was struck in front and was adjudged LBW to the impressive offspinner, Steven Jacobs. A mixup between Kamran Akmal and Jesse Ryder resulted in Ryder(35 off 26) being runout. The slow outfield could have been the reason for this misjudgment. This changed the tone of the chase as Akmal tried to make amends for that runout. He found a good partner in Sunil Ambris and together they added 43 for the 5th wicket. The reintroduction of Sohail Tanvir into the attack ended the innings for Ambris. He made a composed 26 off 17 balls. Karma finally came for Kamran; he ran himself out for 32(31). At that stage, they needed 30 in 17 balls. Tanvir conceded 4 runs and took the wicket of Sammy in the penultimate over.
The equation became 19 to get in the last 6 balls. Emrit came in to bowl that over. He removed Rakheem Cornwall in the 2nd ball before there was a minor scare from Kyle Mayers, who struck back-to-back boundaries as they require 11 in 2 balls. Emrit gave away only 1 run in those balls as the win for Guyana was secured. The Windwards fell short of their target by 9 runs. 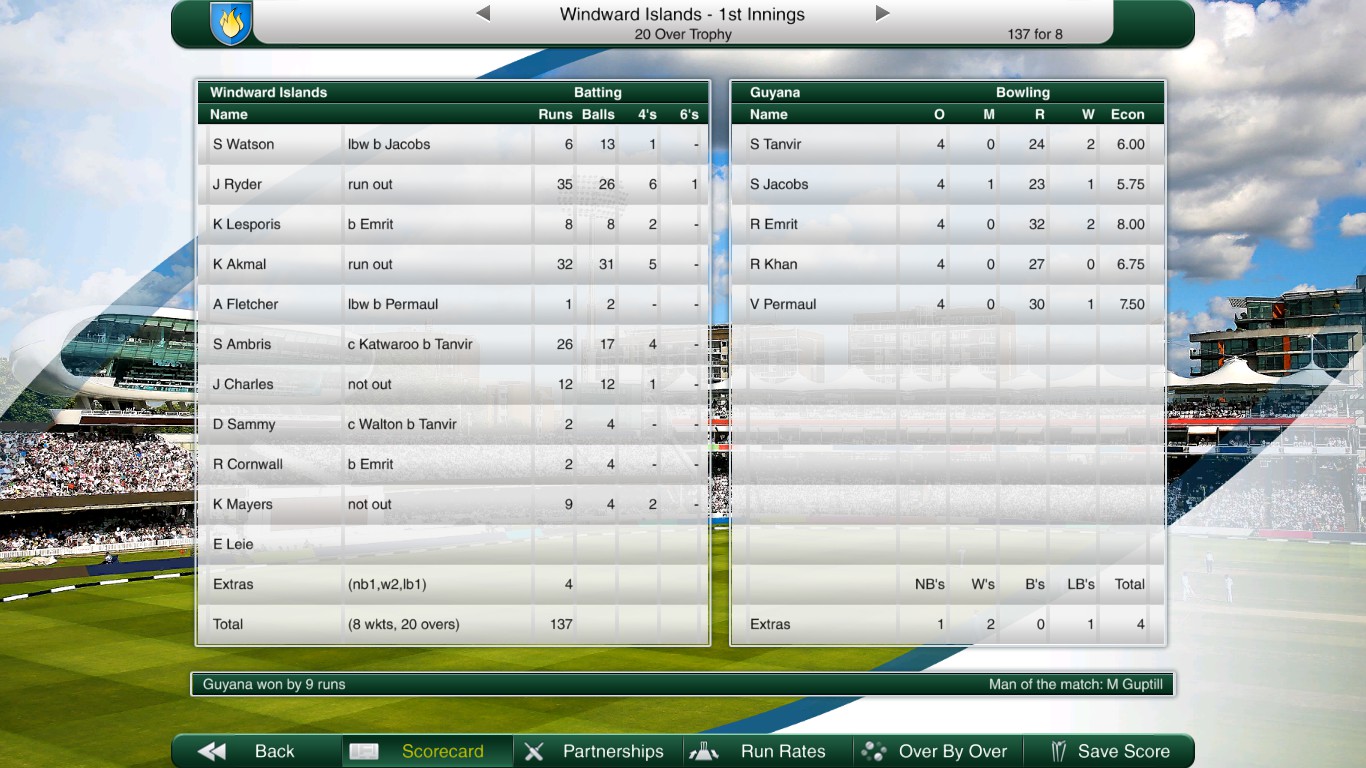 scoring only 146 in a T20 game having lost only 2 wickets seems odd. Must have been very tough batting conditions.

honestbharani said:
scoring only 146 in a T20 game having lost only 2 wickets seems odd. Must have been very tough batting conditions.
Click to expand...

I think the state of the outfield played a big part in that. Guptill and Babar hardly took any chances up until the end of the innings. Hetmyer's knock was important. Guptill was batting at close to a run-a-ball throughout the partnership with Hety. It was the 12th over when Hetmyer departed, and I thought at that stage that we will be lucky to muster something in the low 130s.
Last edited: Jun 10, 2020

Steven Jacobs figures in the tournament:

It's impressive considering he is opening the bowling with Tanvir.

Guptill's been useful, though hasn't attracted NZ eyes to the thread