Conditions for this match:

I've opted to replace Jason Mohammed with someone who I have actually played against, Gajanand Singh from the same club that Hetmyer plays for. He is an aggressive left-hander. Hetmyer also moves one place up in the order. I am hoping we make a big score if we win the toss (batting first a no-brainer).

Permaul's Best Rattles Leewards​
Career-best T20 figures by Veerasammy Permaul saw Guyana registering their first win of the T20 season-2017. He was especially a menace for the lower order batsmen, as he dismissed them either by the bowled or the LBW route.

Earlier in the day, Leewards won the toss and inserted Guyana in to take the first strike. Skipper Guptill and Walton again got Guyana to a decent start. They put on 56 in 7.2 overs as Alzarri Joseph got the breakthrough, dismissing Guptill for 30 off 25 balls. His knock was laced with 5 fours. Babar Azam came in at #3 and together with Walton they worked the ball around and got the odd boundary or two. After 10 overs, the score 75/1, Tabraiz Shamsi got the wicket of Walton in the 13th over for a well-paced inning of 40 (24; 5x4, 1x6). The youngster Hetmyer didn't last long. He hit one boundary and was then bowled by Cotterell for 5. Gajanand Singh playing in his first game at this level showed promise. He pounded a string of boundaries and then lost his wicket to Hasan Ali for 17(18); it was the last ball of the 19th over with the score on 141/4. Roshon Primus came in for the last ball of the innings and without hesitation walloped that ball down the ground to the long-off boundary. Guyana ended their innings on 152/5, 2 more runs that what the made in the first game. Babar Azam was left undefeated on 53(42 balls; 9x4). 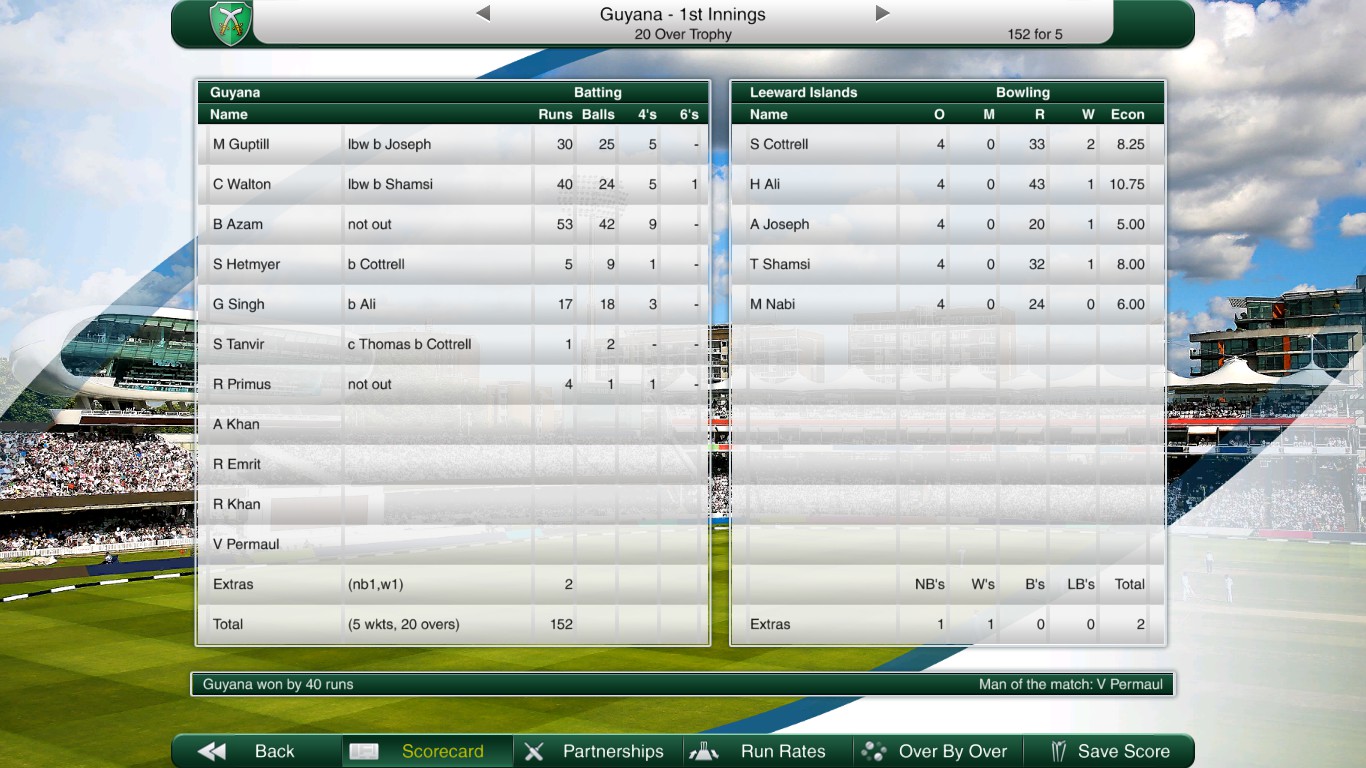 Leewards having chased down a similar score, would have been confident with the task at hand. Tanvir struck in the 1st over removing Shamarh Brooks for 8. Rashid Khan came in to bowl the 2nd over of the innings. Captain Guptill was being aggressive on the batsmen, gotta get wickets. Wickets win you matches. Rashid rewarded his captain with the wicket of Mohammad Nabi in his second over. Nabi was looking dangerous, he made 15(11) with 2 boundaries and a maximum. Emrit came into bowl the next over got the wicket of the Professor with his first ball, Brandon King fell in the last ball of the over. Leewards were on the back foot now.
The cameo stars from the first game, Jonathan Carter and Devon Thomas joined forces in the last over of the powerplay with almost half the side down and with 114 runs still required in 90 balls. They were batting according to the required rate before Guptill pulled another trick out of his hat. He brought the all-rounder Primus in for the 9th over. Thomas was adjudged LBW to a ball from Primus. He made 9(12). Permaul was brought in for his 1st over of the game in the 13th over, and he made inroads immediately. He dismissed Jeremiah Louis and Hasan Ali in consecutive balls. Going for the kill, Guptill gave Rashid Khan the ball for the next over. Lots of chances followed as Carter and the tail-enders were trying to up the scoring. Rashid removed Cotterell for 5(11) in the 16th over as the Leewards were left with their last 2 wickets. The following over, Permaul did the cleanup job and removed Shamsi and Alzarri in back-to-back deliveries. It was a triumphant win for Guyana. 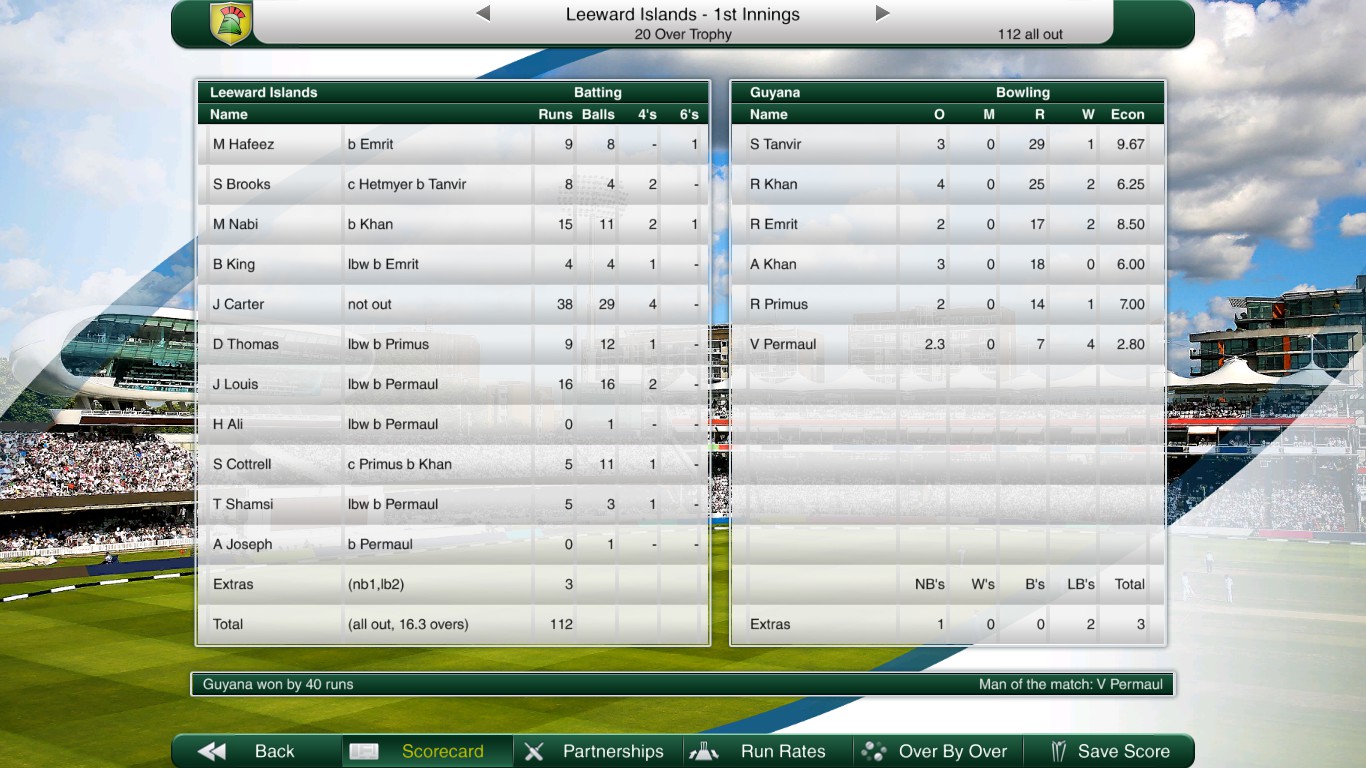 With that win, we are now on top of the table: 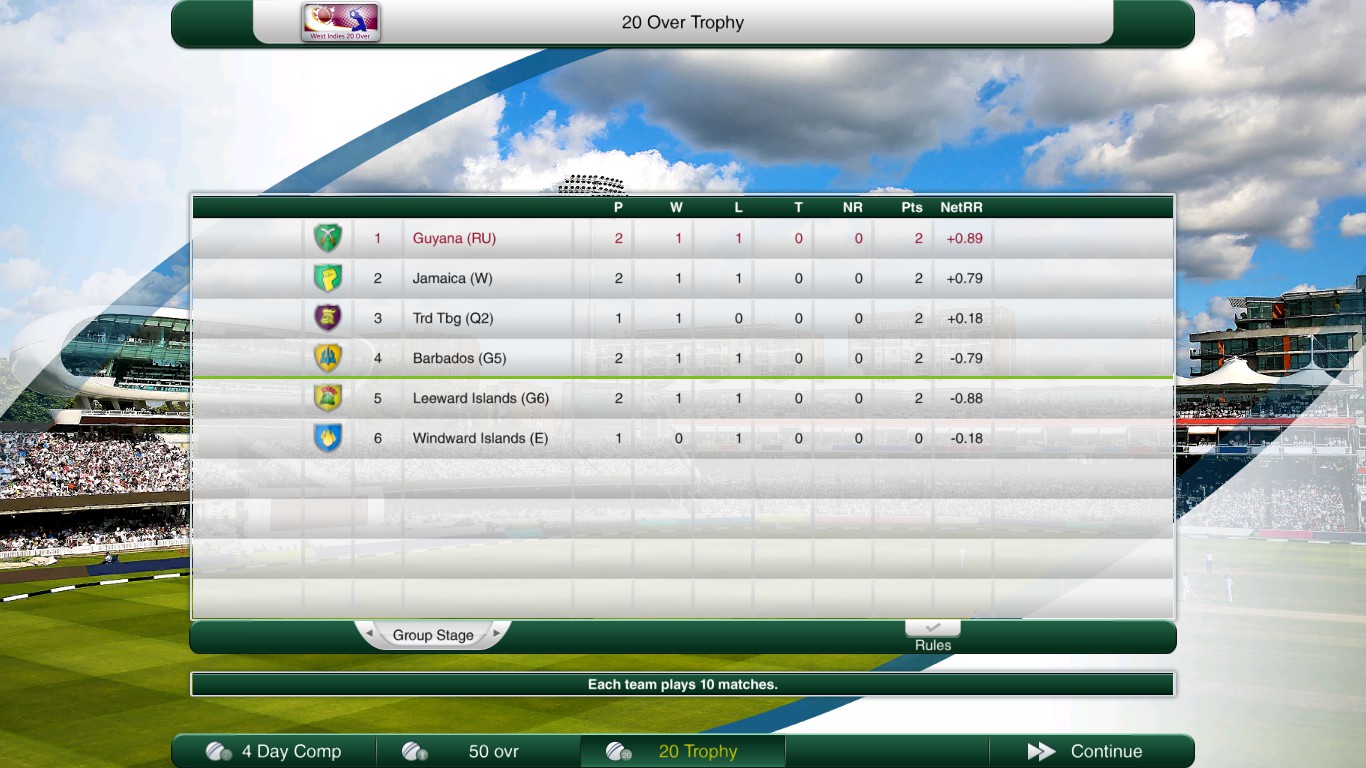 big Trini boys next, could be a swift decline

Magrat Garlick said:
big Trini boys next, could be a swift decline
Click to expand...

Their bowling attack might be stronger. Will have to make at least 175 to win against them.

Haven't looked at their squad to see who they have. I'm pretty sure they have both Bravos, Narine, and Simmons.

the moment you cross 160 in ICC in T20 games, you have a >60% chance of winning I think. Somehow it lets the chasing team go very hard very early and they end up like 30/5 after the powerplay.

honestbharani said:
the moment you cross 160 in ICC in T20 games, you have a >60% chance of winning I think. Somehow it lets the chasing team go very hard very early and they end up like 30/5 after the powerplay.
Click to expand...

160 is a pretty good score to defend. I haven't made that in a while.

We will be playing the 3rd game of the tournament in a few minutes.

Any news regarding injuries, training, and lineup will be provided soon.

*Only one change in training: Hetmyer's aggressive shots to general technique

Okay so here we go, pre-game against the might Trinis:

With an average wear on the wicket, I have decided to bring in an extra spinner, the offie Steven Jacobs.
Last edited: Jun 9, 2020

Guyana's Bowlers Too Hot to Handle For the Trinis​
An all-rounder performance by Guyana propelled them to a thumping win over rivals Trinidad and Tobago.

Winning the toss and electing to bat, the opening pair of Guyana once again gave them a good start. They put on 98 runs in 12 overs. Captain Guptill hit his 2nd fifty-plus score (51) in 3 three games, while Chadwick Walton made a solid 46 off 33 balls. There were contributions from Hetymer (who came out in an aggressive intent after his training was changed from aggressive to general technique), Gajanand Singh (13), and Babar Azam (run a ball 12). Guyana ended their innings on 154/6. Aussie Brad Hogg was the pick of the bowlers for the Trinis; he took 2 for 29 off his allotted overs. 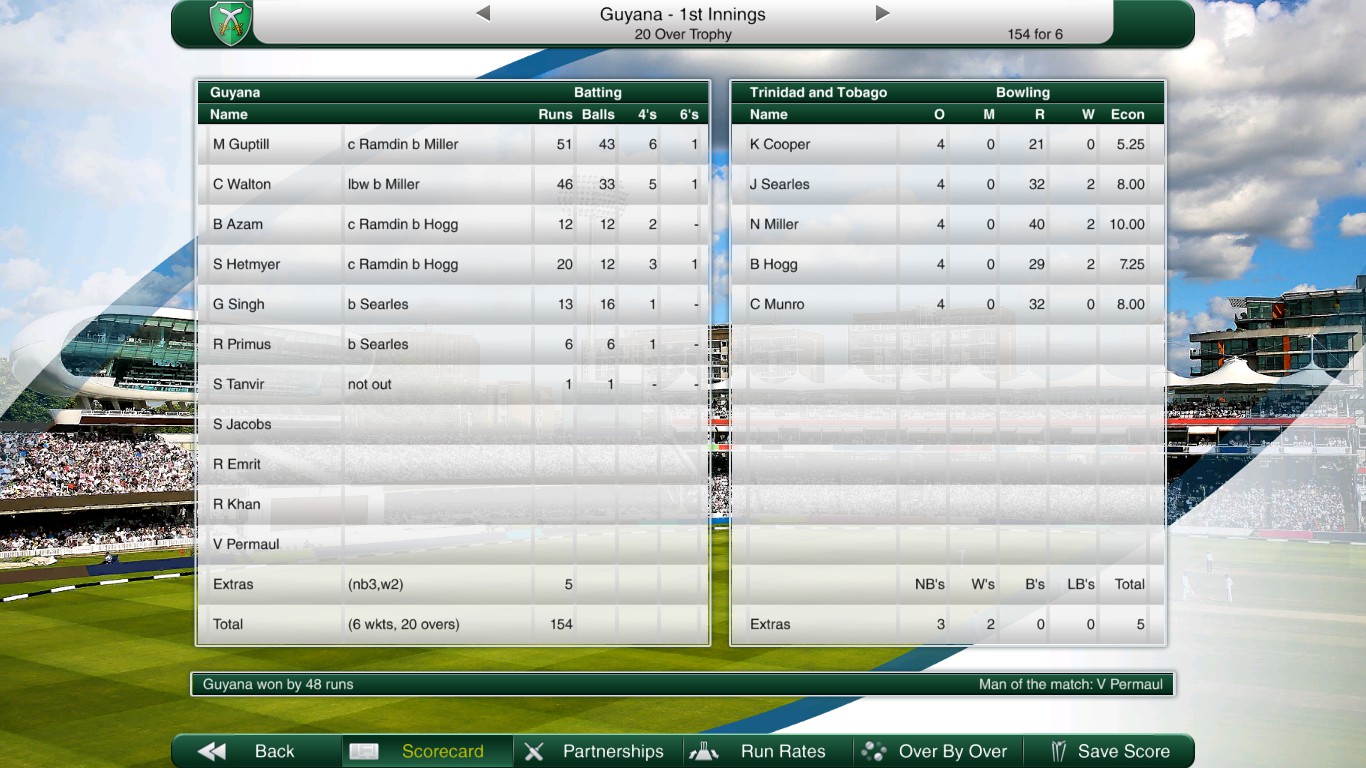 With seasoned international batsmen, Amla and Brendan McCullum as their openers, TT would have fancy their chances against a bowling that was rated the worse at the start of the tournament. Sohail Tanvir struck in the first over removing Amla for 5, and in the 3rd over got rid the dangerous Colin Munro (4). The next over Emrit trapped Baz LBW for a run-a-ball 13. TT finished their powerplay on 36/4, and in dire need of recuperation to their innings. Their innings never gained momentum. They had lost half of their batsmen before the introduction of Rashid Khan and the red-hot Veerasammy Permaul. The wickets kept on falling in regular intervals as Permaul accounted for 4 of the last 5 wickets. The Trinis were eventually bowled out for 106. Khary Pierre was the only batsman who showed any fight for them as he made an undefeated 32. Permaul followed up his 4 wickets in the previous game with another four-wicket haul 4-14 (3.2); the pacers, Tanvir 2-12 and Emrit 2-18 with next best figures for Guyana. 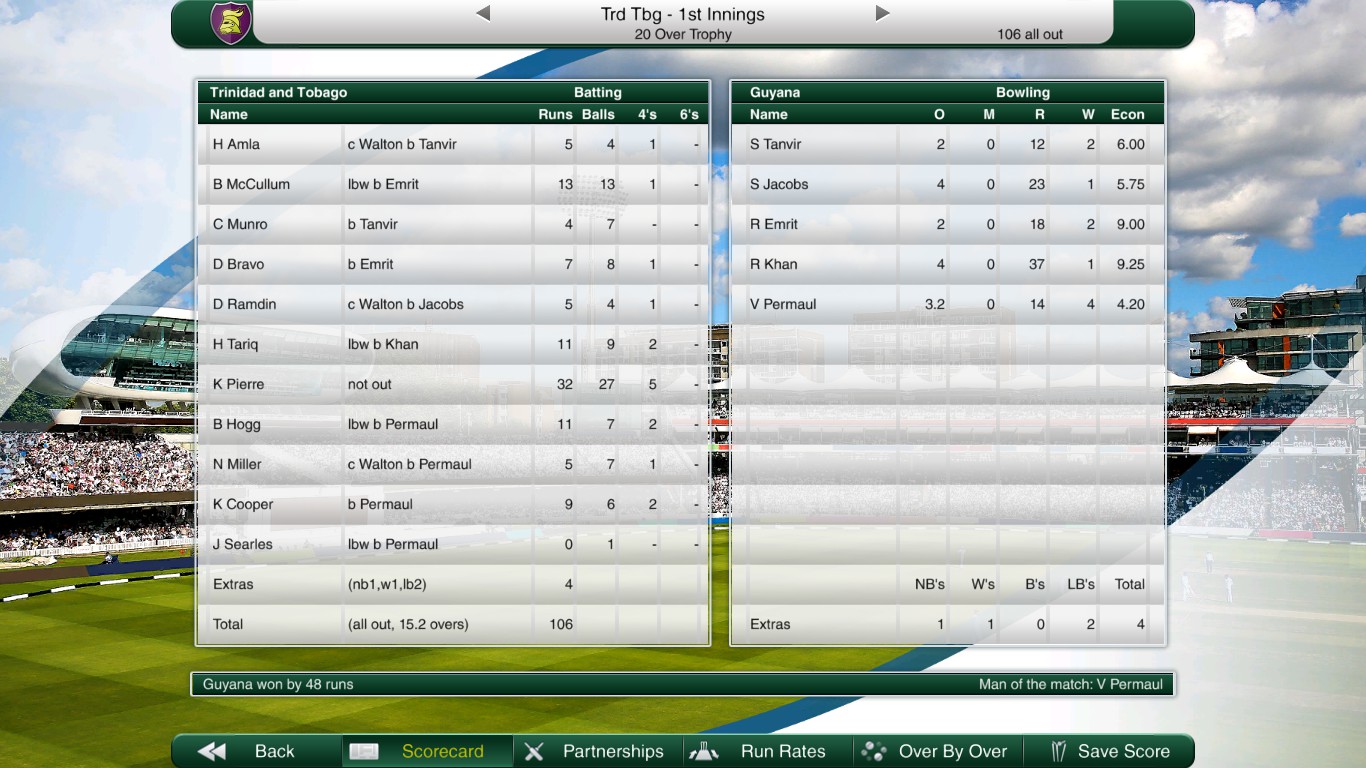 I'm really surprised that TT went that far with Colin Munro as a bowling option as specialist spinner Khary Pierre didn't even have an over.

SillyCowCorner1 said:
I'm really surprised that TT went that far with Colin Munro as a bowling option as specialist spinner Khary Pierre didn't even have an over.
Click to expand...

Magrat Garlick said:
said specialist spinner was the only one to keep Permaulings at bay lol

Yeah, Pierre took a liking to the great Rashid Khan. This game really doesn't rate him.

I thought that this TT team was legit bit seems like they might be too top heavy.

Permaul is your star, SCC. Keep picking him.

honestbharani said:
Permaul is your star, SCC. Keep picking him.

Yeah, his economy rate in the last game was 4.20

The universe is in harmony.

SillyCowCorner1 said:
I'm really surprised that TT went that far with Colin Munro as a bowling option as specialist spinner Khary Pierre didn't even have an over.
Click to expand...