I have had this game for over 2 years now, and have a saved game playing with Guyana. Currently in the year 2037.
I want to start another career with Guyana...beginning from the inception of this game. 2017 season.

In 2017, Guyana had won the last 3 years of FC cricket under the captaincy of Leon Johnson. The team was reliant more on their batting to get them the big scores...There was Vishaul Singh and co. for this. In the bowling department, it was Veerasammy Permaul and fellow spinners making the Providence Stadium a fortress.

So, as I am about to choose Guyana as the team I will be playing with. I wish to show the relative strengths of the other teams. 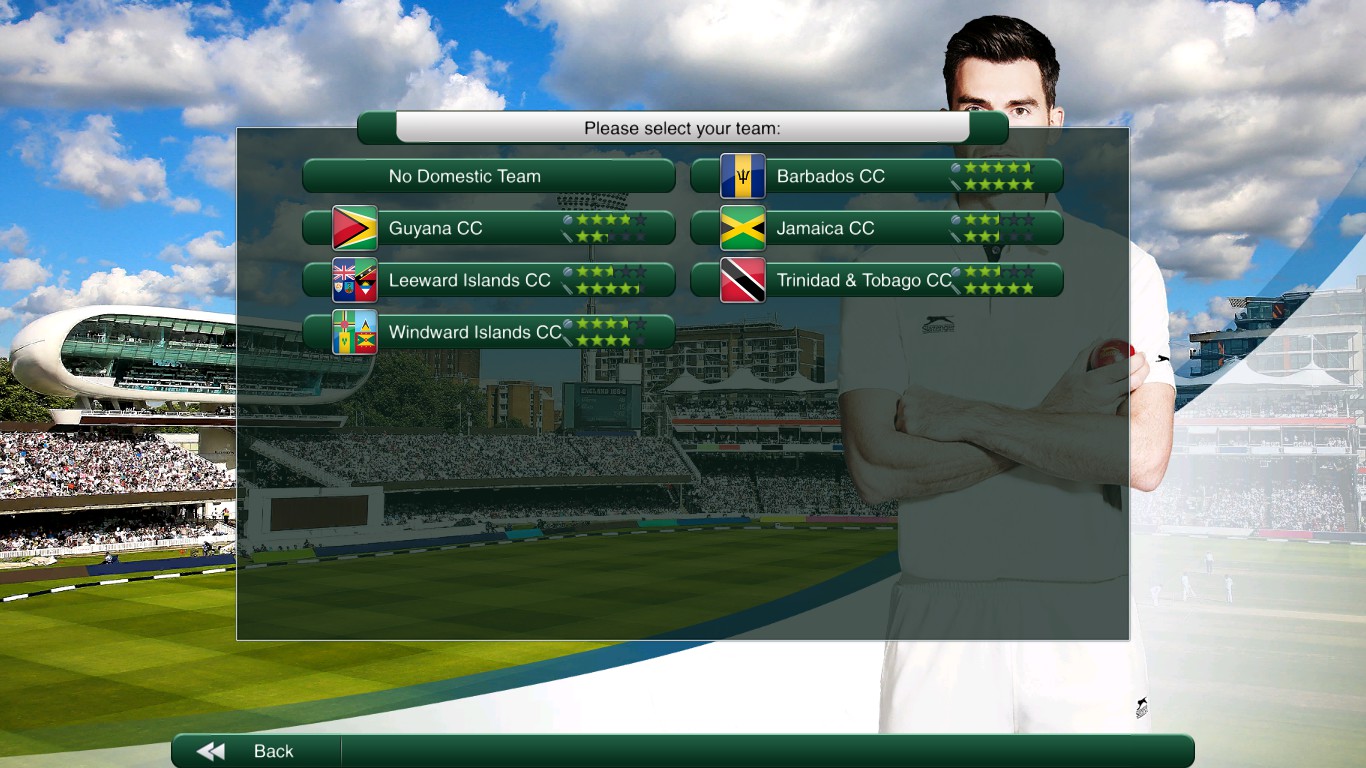 Out of a maximum 5 stars:

The Bajans are obviously the most balanced team. No surprises. I am quite enthused abour Leewards high bowling ranking. It could be because of Alzarri coming off an under-19 WC win...and the great Rakheem Cornwall. The same can be said of the Windwards, they have Devon Smith in their team, but their bowling relatively unknown. TT always with that bowling fire. Crazy. The game's developers did the mighty Jamaicans really bad. They just need a good skipper.
*
*
*

Over to the T20 side now...We certainly are more rated here, but still behind a few teams. Windwards looks the strongest: 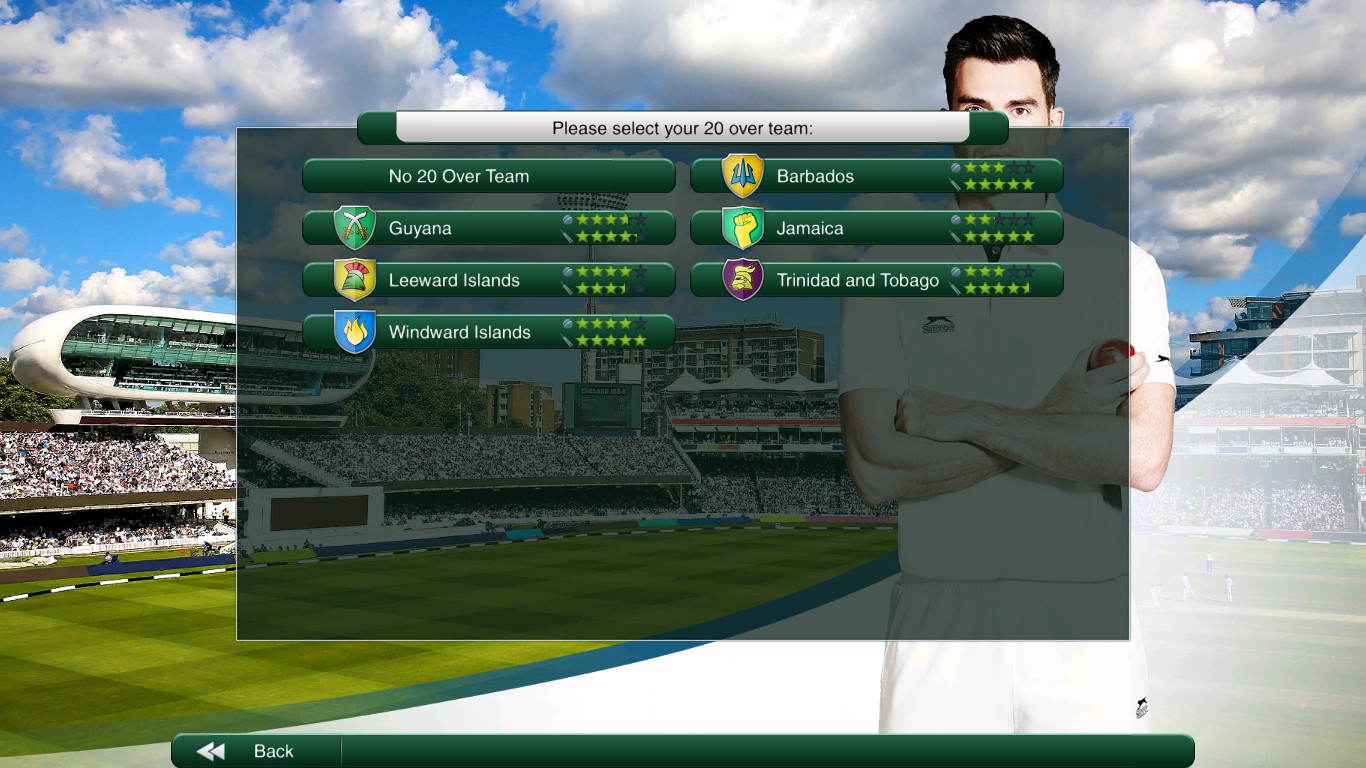 
Playing on a skill level of Normal
Test Captaincy: Earn it

Join me as I embark on this journey.
Next post will be team composition and training preferences, etc

Overseas International Players: Babar, Guptill, Rashid Khan, Sohail Tanvir
-Babar should add some stability to the batting order. I'm planning on sticking him in at the #3 slot
-Guptill, I am expecting to get blistering starts from him
- Rashid Khan should do what Rashid Khan does best
-Sohail Tanvir is expected to spearhead this bowling lineup, and add valuable runs down the order: cameos

On captaincy, I am willing to give an overseas player the role. It will be Martin Guptill.

First up on our schedule: Date of the game is 5th August 2017

A T20 night game versus the Leeward Islands in Florida

Not sure if I'll play it or sim it.

Why Guptill instead of Hetmyer

zorax said:
Why Guptill instead of Hetmyer
Click to expand...

From the game's standpoint, it is 2017 and it shows Hetmyer having played only 1 T20 game, making a duck. Giving captaincy to an experienced player was what I had in mind. And Hetmyer's too green for that, even though he's won an ICC Under-19 World Cup

Yea fair enough. If he does well he can have it next season.

Leading from the front already Permaul.

we hope for many permaulings.

zorax said:
Yea fair enough. If he does well he can have it next season.

2 good shouts yes.
Why I didn't go with them? Emrit doesn't have too much experience, and I personally don't see him fit for captaincy. Permaul is too defensive for my liking. He was among one of the candidates considered for the job though...

Magrat Garlick said:
we hope for many permaulings.

Here is the full T20 fixture: 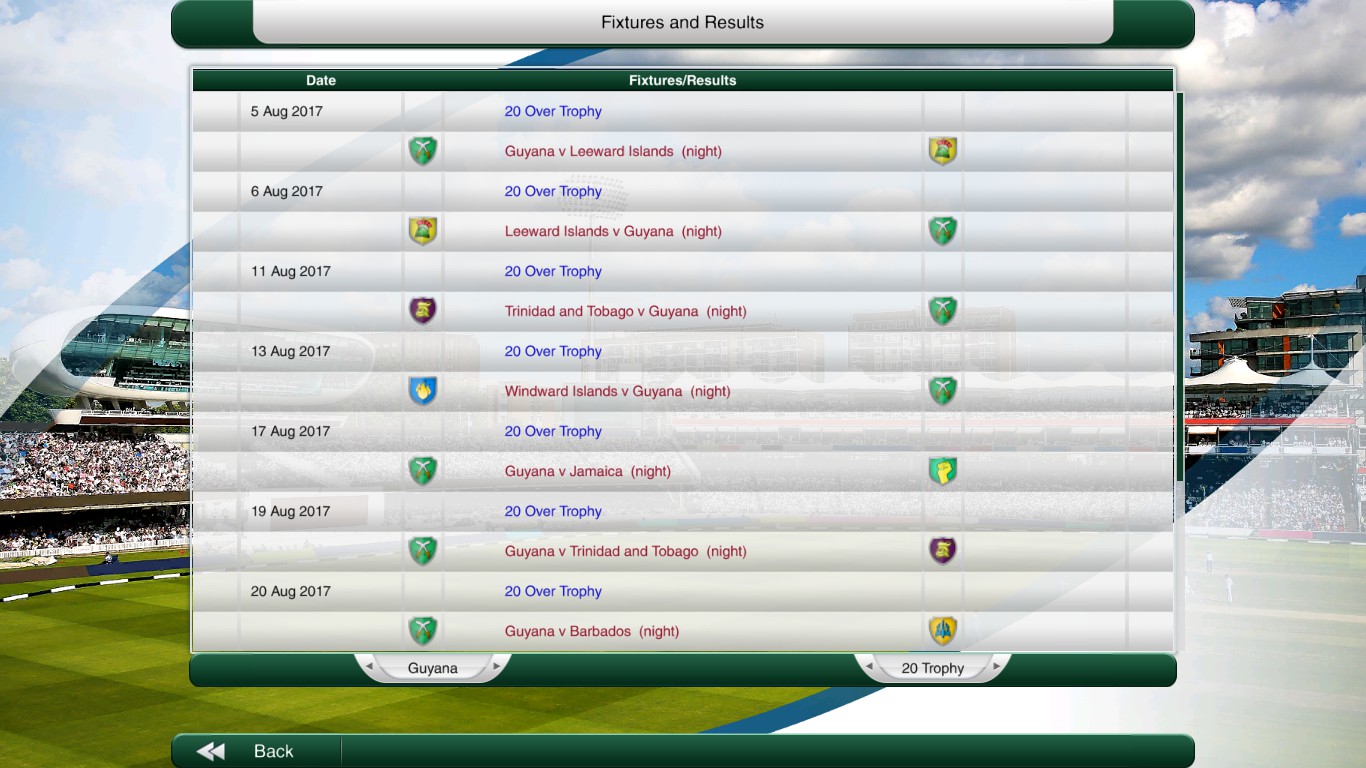 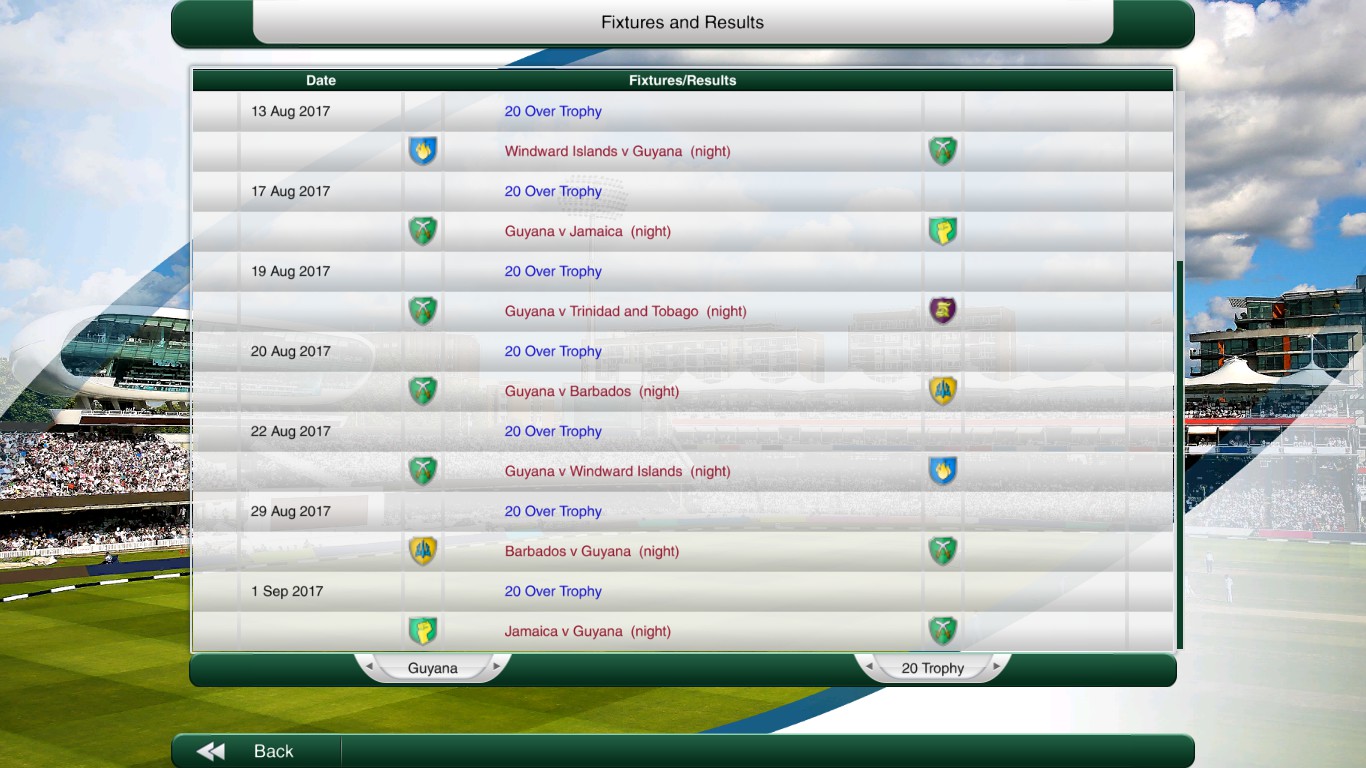 This is awesome.. I wish I had ICC on my laptop so I can post the screen grabs of my game too. Will go and update my thread in a bit.

All the best SCC... Win everything.

So the first match has been completed.

Carter and Thomas's Cameos Trump Guptill's 80​
On a clear and humid Florida night, cricket fans came in their droves to witness the first game of the Caribbean T20 competition.

Guyana's captain, Martin Guptill won the toss and without hesitation chose to bat first on a decent track. The captain and his opening partner, Chadwick Walton took the attack to the Leewards bowlers in the powerplay overs. The pair put on a century-run partnership in quick time. Their stand was broken in the 14th over as youngster Alzarri Joseph struck. He trapped Walton LBW for a well-made 39 of 29 balls. He walked back to the pavilion with the score on 115. Babar Azam came in at #3 to join his skipper. He was stroking them fluently and playing briskly before being flummoxed by a wicked delivery from the chinaman bowler Tabraiz Shamsi; he made 17 off 14 balls.
At this point, one would expect the exciting Shimron Hetmyer to enter the middle, but that was not the case.

Jason Mohammed came in instead. Two balls later, Shamsi would strike again, and it was the wicket of the big fish, Guptill. The captain made a less than pugnacious 80 off 66 balls, his wicket fell with the score on 138 at the end of the 18th over. With just a few handfuls of deliveries remaining Hetmyer came in. This was only his 2nd T20 game.
The 19th over was bowled by Mohammad Nabi. He conceded only 3 runs off the first 4 balls before trapping Hety LBW. Sohail Tanvir spoiled what would have been an excellent over for Nabi with a hit straight back over the bowler's head that went to the long-off boundary.
Hasan Ali bowled a brilliant last over as only 5 runs came off it. Guyana ended their innings without an fireworks; it was quiet. 150 for 4. Bowling for the Leewards, Shamsi was the pick of the bowlers with 2 for 31 off his 4 overs, Nabi had miserly figures of 1 for 21 off 4 overs, and Alzarri with the single wicket for 36 runs. 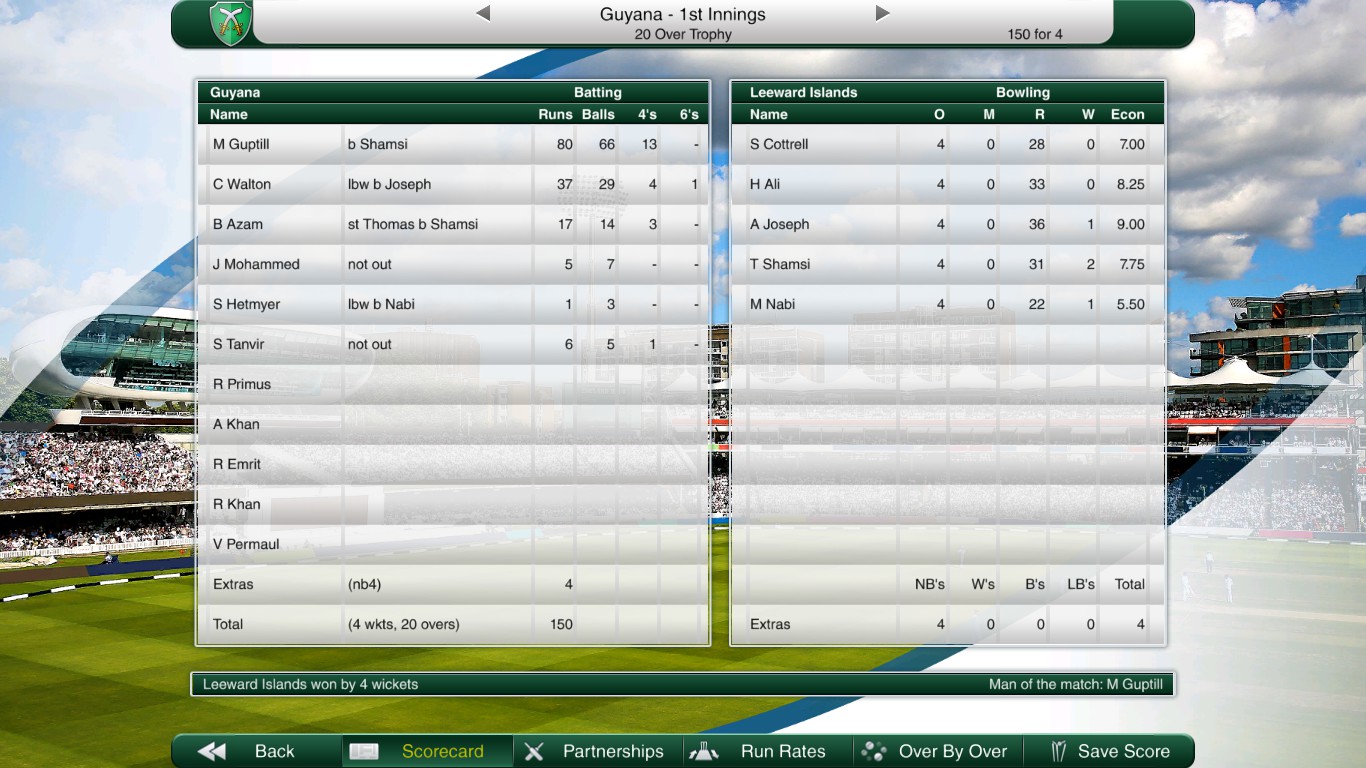 So the equation for the Leewards was 151 to get off 20 overs at 7.55 an over. The professor Mohammad Hafeez and Shamarh Brooks were their opening batsmen. They started off briskly, getting to 31 in the 4th over as Rayad Emrit got the breakthrough. Brooks gone for 16 off 14 balls. Nabi came in at 3 and he started off sedately, his partner at the other end was more the aggressor. The aggressor professor. They added 61 for the 2nd wicket. Permaul, coming off an injury a few days ago, then clean bowled the professor for 41 of 34 balls.

At this stage, Leewards needed 59 runs off 33 balls. Nabi then lobbed a return catch to Ali in the next over, and it seemed as if the momentum was shifting towards the side of the Guyanese. This was soon about to change, as soon as the experienced Jonathan Carter came in. He struck 2 fours and 2 sixes in 11 balls at the crease. When he was dismissed they equation was 20 to get off 17 balls. Tanvir bowled a magical 18th over, giving away only 2 runs; Ali and Emrit each had one over remaining. Guptill also had the all-rounder Roshon Primus available if needed. Emrit bowled the 19th over, Devon Thomas smashed 2 of the deliveries in that over for boundaries, the other 4 were dot balls. Ugly swipes and LBW appeals.

With 10 runs required off 6 balls, captain Guptill gave to ball to the inexperienced Ali Khan. He gave away 4 runs off the first 4 balls, but then Devon Thomas crashed the last 2 balls of the game for boundaries. Too much nerves for Ali Khan. 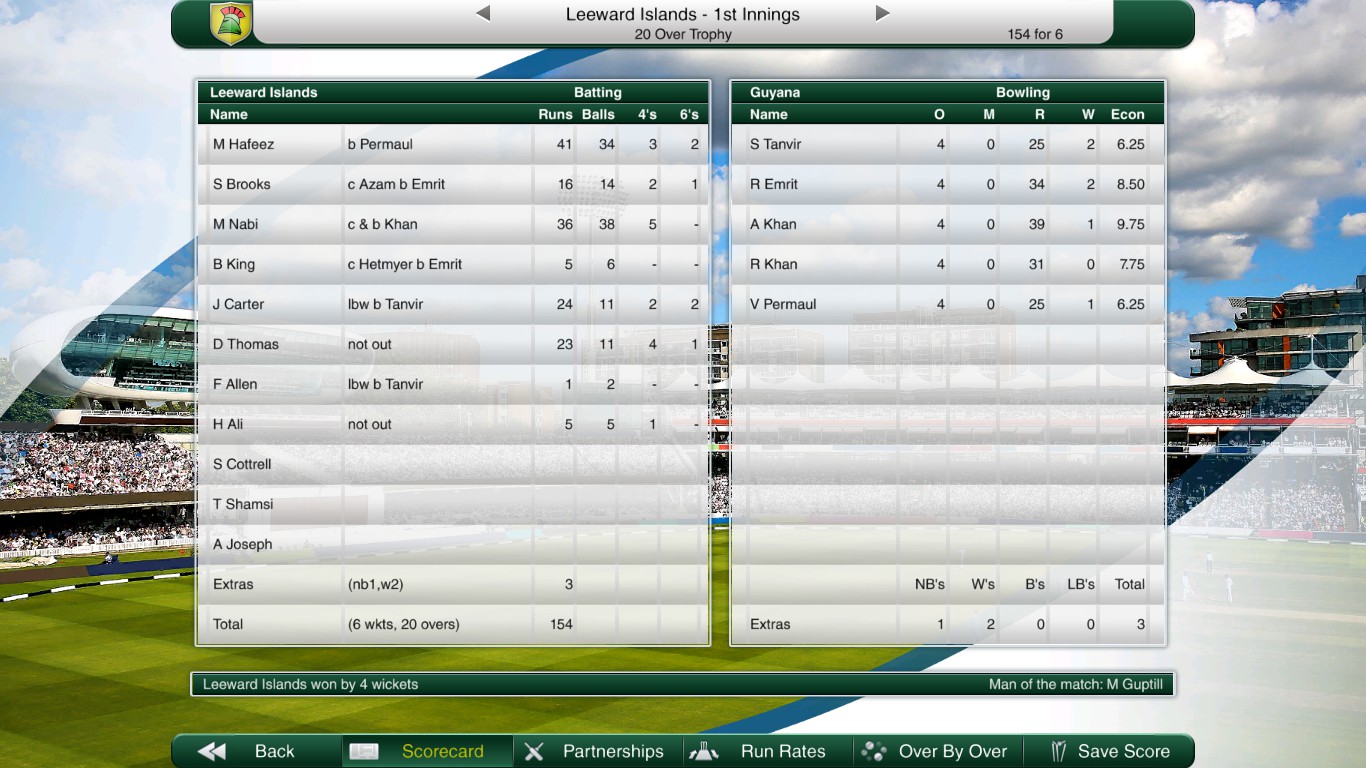 honestbharani said:
This is awesome.. I wish I had ICC on my laptop so I can post the screen grabs of my game too. Will go and update my thread in a bit.

All the best SCC... Win everything.
Click to expand...

Well, this is something new to me. Just trying to write match reports and other miscellaneous stuff for fun lol.

Rashid Khan had a relatively quiet match compared to the other spinners.
Perhaps it was because he was introduced too early in the attack? He started in the 7th over and bowled out his overs in one spell. Bad captaincy Guppy!

Next match set to start in 12 hours time.

Due to unforeseen circumstances and the weather, play has been pushed back further in the day.

Start of play is tentatively set to start at 2:00PM local time.

Guyana will be looking to avenge their loss against the Leewards in this second game for them in the tournament.

We apologize for the delay.