Had fun running the last version of the Sim League, so I'm back again to kick off another new tournament with a fresh new idea. This time the concept revolves around World Series Cricket from the late 70's. Instead of a nation v nation tournament, this one will be similar to the modern-day IPL or BBL in that participants will draft their own teams from the player pool of the era & face one another in a T20 comp. Looking to get 8 or so players for this one, but will be happy to allow more people than that to join if they so wish.

T20 League. Each side will meet each other once in the round robin stage, with the top four ranked teams progressing to the finals. A draft will preceede the sim, in which everyone will get to draft their full squad of 14. Rather than RNG draft orders, we will make use of a countdown timer for each round. This will most likely take place every 24 hours, after sign ups.

International Cricket Captain 2013. It's old, but it's good.

Eligible players must have played either international cricket, or World Series cricket between 1977 - 1979. Alternatively, due to the political situation at the time, the following players may also be selected...

In the event of a tie during a final, the higher ranked team from the group stage will progress.

In past tournaments we've had people playing the same XI for the entire tournament. Whilst there's nothing wrong with this, I just find it to be a bit unrealistic & a tad boring. And so, as a new rule for this comp each team must give at least one game to every player in their squad.

No trial matches this time around.

If you wanna give it a crack simply post below with your team name. Have already got a few people from last time keen for this, & hopefully will see a few others looking to get involved in some tasty, tasty sim action.

For anyone out there who's ever wondered what happens beneath the hood with these sim leagues, here's a look at the editing app I use to create the teams. As you can see I can edit just about everything ranging from skill level, fielding positions, right/left hand, aggression levels etc. 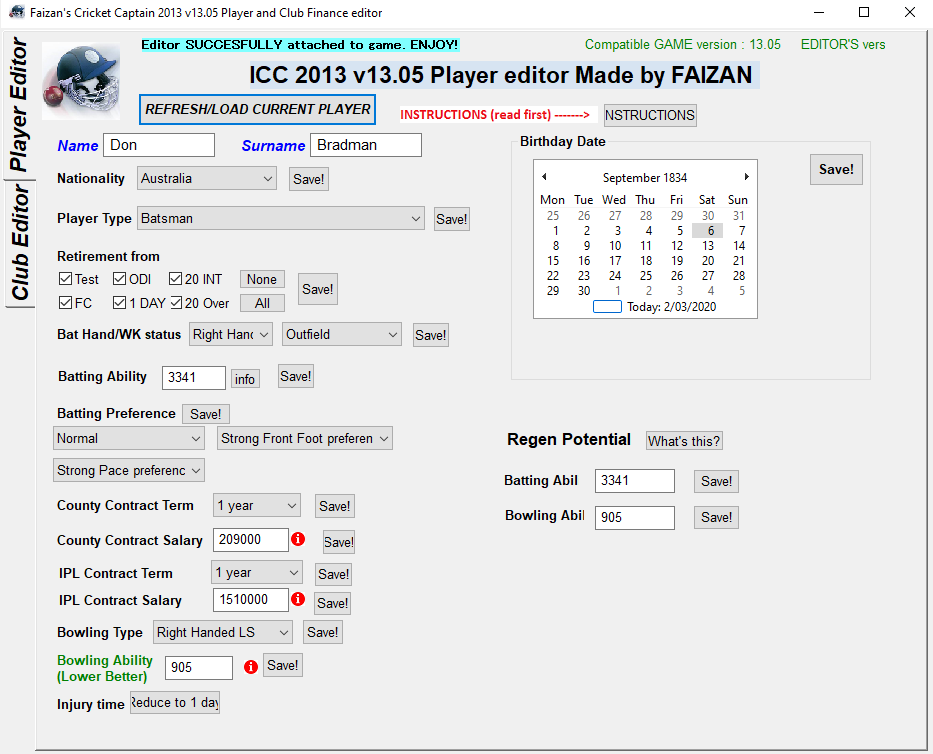 Awesome. I am in. Gonna have fun watching a bunch of test specialists in the LO format.

harsh on the politics for John Traicos tho (at least the wee lankans are available)
Click to expand...

I forgot about Mr Traicos. Will most certainly add him to the list.

So far we have five entrants confirmed. Had Milenko express interest in this comp in the other thread, so will send him a quick PM to let him know this new comp is active which will bump us up to six if he joins. Looking to get around about eight people involved, so hopefully a couple more ninjas throw their hats in. If we're really struggling for numbers I could also field a team of leftovers once the draft phase has been completed.

I'll give it a crack.

Healthy amount of participants now. Still plenty of room for anyone else wishing to join though.

So I've been having a think about how to run the draft phase. The idea is to have a universally agreed upon time every 24 hours after which picks can be made, until each squad is complete. In the past I have used a countdown clock (which I can still utilise if people would prefer) but I was thinking there's no real need for it if we're all aware if the time in question. Since we will most likely have participants from all over the place, I propose we nominate 10:00 GMT as the time when each round will open (repeat every 24 hours).

And obviously 10am in London.... Everyone cool with this? Seems to be the time which gives everybody a realistic chance of being able to pick straight away. Please let me know what you think. If this works for everyone, we can get this underway at 10:00 GMT tomorrow (March 4th).

IT works for me.

All good on my end.
A

9 confirmed so far. Anyone else wishing to join is still welcome. If we get more than 10 I may look at widening the player pool.

Also, don't forget to throw down your team name when you get the chance :-)