Sports fans spend a multitude of time and money watching, speculating, and gambling on their favorite sports teams. It’s a known fact that many details about a particular game go unnoticed or unlearned for many fans. The game of cricket is no different. The fact that it’s played solely in certain parts of the world, including Pakistan and India, makes it harder to follow for new fans in different parts of the world. However, most games are shown on satellite and cable television nowadays. This means betting will experience an influx of punters and gamblers than it has in the past.

This is why a solid foundation on the game’s facts is important. That being said, let’s take a look at some amazing cricket facts to add to your appreciation of the game.

Several players have taken on test matches during their positions as captains. However, Grammy Smith, a South Africa cricket player has participated in 100 test matches, while holding the position of captain.

2. Most Wickets in Shortest Runs

For seventeen years, Chimdan Vaas a Sri Lankan player has held the record for taking the greatest number of wickets, while giving the shortest runs. His record stands at eight wickets for a mere nineteen runs.

Under the name England, their greatest fete lies in innings during 1930, where they scored 579 runs. This was also achieved in Test cricket.

In the 2007 world cup, a Sri Lankan bowler named Lasith Malinga took four wickets in succession and set a world record that stands to this day.

Cricket was incepted in England, but the land of the Queen didn’t realize its first World Cup win until 2019. That’s a fact worth noting for anyone who likes sports debates.

As long as you plan to bet on a certain cricket team, or at the very least watch one of their games, know that the first Cricket World Cup took place in England. This was in 1972.

Popularly known as the God of cricket, Sachin Tendulkar’s full name is Sachin Ramesh Tendulkar. This god as it were, holds the record for scoring the most runs in international cricket.

After nations like India took on the sport, a few countries followed suit. South Africa embraced the game early on in 1888 and New Zealand began playing it in 1930. Pakistan and Sri Lanka followed suit in 1952 and 1982 respectively.

12. Number of Balls in One Over

During the first years of the game, cricket players used 4 balls for one over. This changed to five balls in 1889 and shot up to 8 balls in the year 1922. However, the rules changed again in 1947, reducing the number to six balls allowed in one over.

Born on 8, 4, ‘63, Stewart holds a record 8463 runs during his test match playing career. A handy anecdote for any punter or fact-checker out there.

In 1887, Australia beat England with 45 runs while playing at the Melbourne Cricket Ground. A century later, on the same day, Australia repeated the same by 45 runs, against England!

The most successful cricket captain to date is Singh Dhoni. He has attained a victory in T20 in Bars in 2007, also claiming a win in The World Cup in Bars 2011, and lastly, Champions Trophy in Bars in 2013.

The record for the most ball games played under one career is held by Rahul Dravid. He has participated in 164 games during his illustrious career, under which he also encountered approximately 31,250 balls. 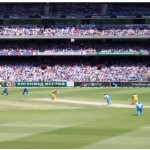 The first-ever international cricket game was played in 1844. The United States and Canada faced off in this game for the first time in 19th-century, during an international game.

Between 1970 and 1992, South Africa was suspended from playing international cricket. This was due in part to their continued upholding of separatist ideals, known as Apartheid. 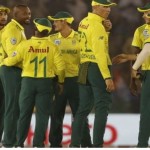 There you have it. 20 facts to add to your cricket knowledge base and hopefully put you at par with other punters, and debaters of this popular game. Though the list is not exhaustive, it captures some fascinating need-to-know facts for fans and betters alike.